The sandbox construction sim finally gets ported to the Switch after being released on Steam nearly 2 years ago. It follows in the footsteps of its fellow simulators like Farm Simulator, Cities Skylines to name but a few that have graced the wonderful portable machine. But does the portability hold up or will it end up in a rubble? Let’s find out…

Demolish & Build lets you take control of a hands-on property developer. You start off doing a job for a shady businessman which ends up badly when you are accused of destroying a pair of expensive statues(even though it was part of the job). After being subsequently fired by the shady businessman, you are then contacted by a more trusty looking man who then offers you the chance to partner with him and start a property business. Obviously, having no choice in the matter, you take the kind man’s money, and you start to do a few quests to start your business empire; from buying your first land and office building to getting your first construction vehicle. This prologue acts as a game tutorial to teach you the basics of the game. 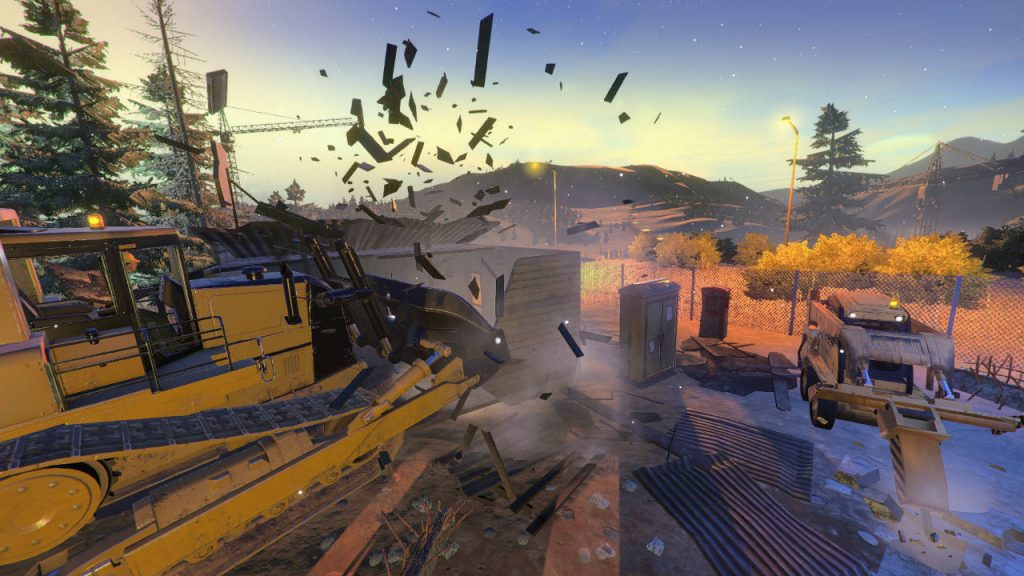 The game puts in you in the first-person view of your character. I feel this ups the immersion of the simulation rather than just having a top-down view. You explore the open-world level and take on jobs, found within the menu; ones that go from simple destruction of toilets to actually constructing a building. There are 4 worlds/cities to go through in which to build your empire, each with varying vehicles to buy for your company. As with most sims, a little bit of effort and time put into the game and eventually, it’ll reward you. Starting off with the menial quest can be a little grindy, but it all goes towards building up your money and reputation. Build up enough capital, and you can then assign these menial tasks to your workers while you get to drive around in a big ass bulldozer like a boss. Balance is key to the gameplay as you have to make sure your company’s reputation goes up while your overheads remain in the black. The overheads can range from buying land to build your properties on to the upkeep of your vehicles, including repair and fuel. To offset these, you can build up your company’s assets; buying land and building houses for rent which gives you a steady income or even gather resources such as gold from digging or scrap material from buildings you’ve demolished. It’s a surprisingly deep game once you get going.

Demolishing can be a lot of fun in the game, I’m not going to lie. There is some satisfaction to be had from having your guy take a sledgehammer to a wall, find the sweet spot and watch it crumble down. Later on, the fun ramps up as you can use your variety of vehicles to just mow down a part of a derelict building or even use explosives for those pesky multi-storey buildings. My absolute favourite is the demolition robot. The controls are not too bad also, X button is assigned as your workers sense ability. Basically a helping hand should you be stuck with what to do, think Witcher sense but for construction workers. For example, it highlights bits of a building you need to take down first during a quest etc. It feels responsive overall in both first-person mode or vehicle control.

There’s a semblance of a story in the form of dialogue (through phone calls) from various characters but mainly from your partner who gives you your starting capital. He drops the odd tid-bit of advice here and there, and some of the dialogue is slightly amusing. 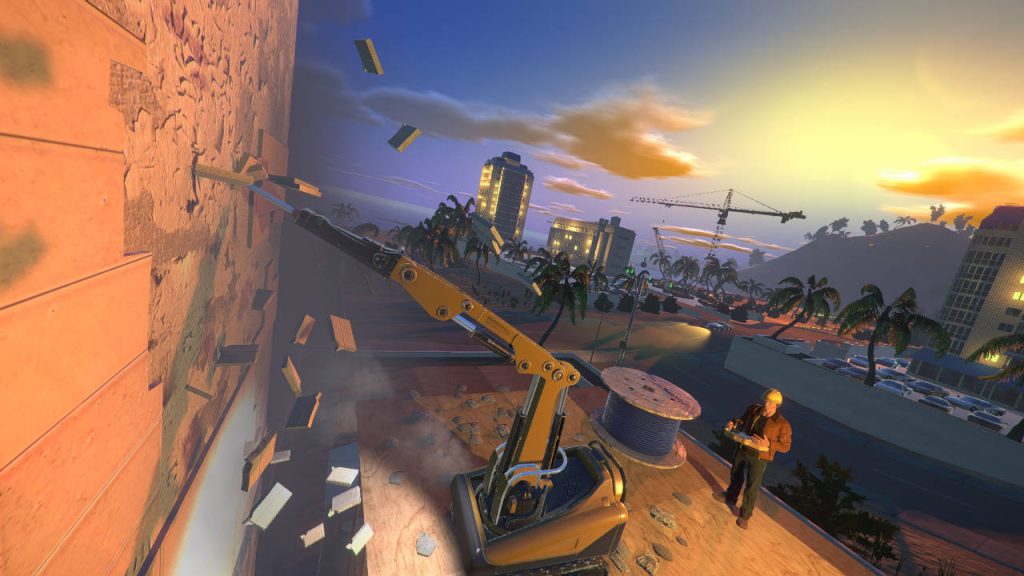 Okay, because this is an indie game, I’m going to give it a little leeway when it comes to criticism of its visuals. It is not the prettiest game, but it’s also not the worst effort I’ve seen. Distance fog is used a lot in the open world, presumably to try and offset the Switch’s processing ability to handle the game’s mechanics so that it runs smoother. I can live with that as in my playthrough, I’ve experienced very little slowdown and no jarring animations. I’m a simple man, give me good gameplay and graphics becomes secondary to my thoughts. The physics in-game can somewhat be lacking; sometimes only portions of a building can be destructible depending on the type of quest you are on. It’s a little disappointing as it would be good to add a little danger to your gameplay or even some consequences to not being careful with your demolishing tools. I mostly played it handheld but found that when docked, the visuals were a little bit better to look at. 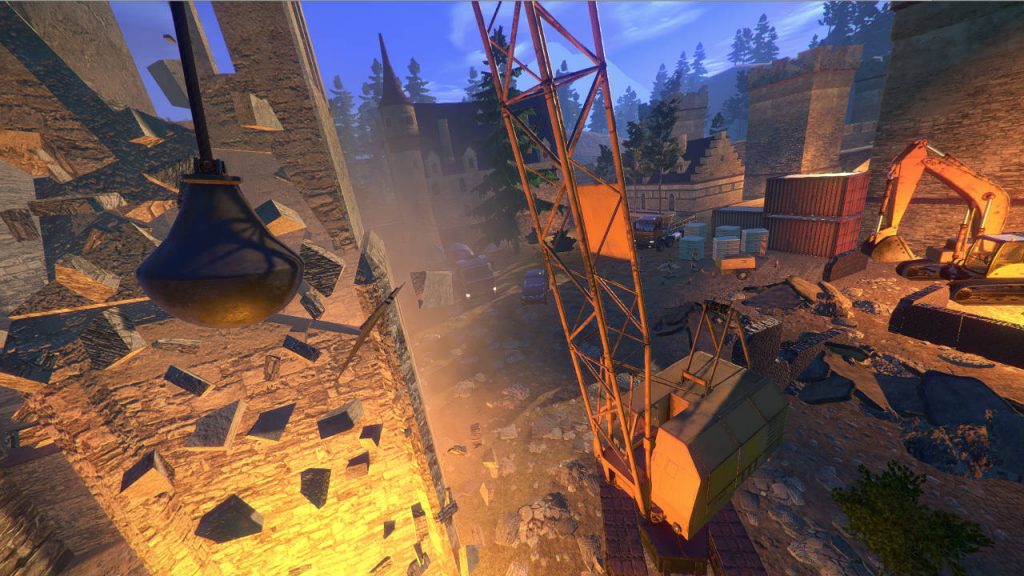 Sound design is actually spot on when it comes to the sounds effects. You can really feel that machine whirring underneath you or that building explosion after you’ve pressed the ignition button. There is a radio when you are driving vehicles with 4 different genre-specific stations available to choose from. And if none are to your taste, you can simply switch it off. Personally, the music does start to grate after a while, so I tend to switch it off after 5 minutes of listening to any of them. 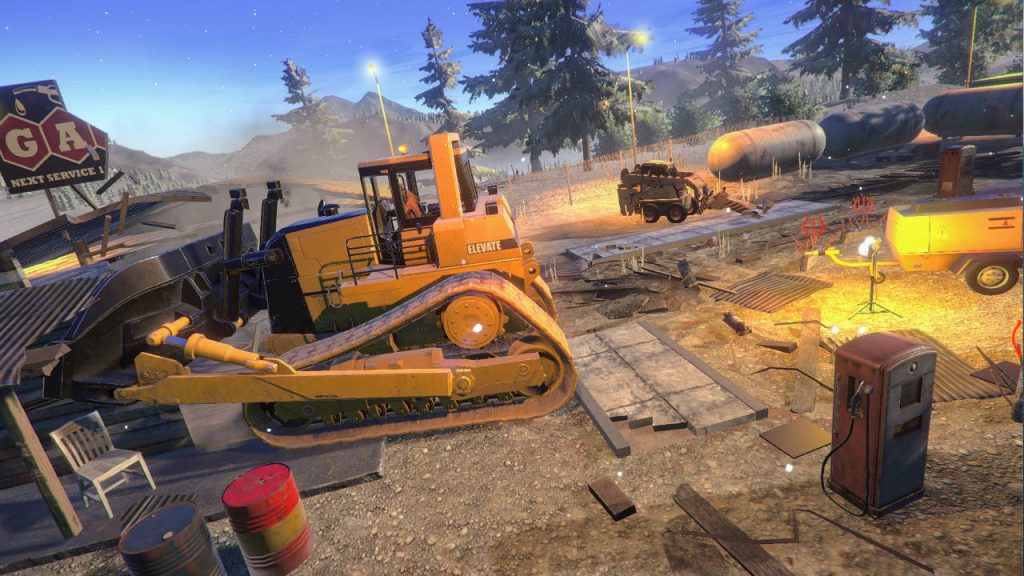 Demolish & Build 2018 is a game that takes a little bit of patience to get into. Like most simulation games you need to put some time into it, but once you do, the game can be quite rewarding. It’s a surprisingly deep game only hindered by its slow start and some grindy mechanics which can put people off from trying harder with it. It plays very similarly to GTA when it comes to driving, but the first person view when controlling your character outside of a vehicle makes the game that little bit more immersive. Most importantly, the game offers that cathartic feeling of smashing stuff up but also a sense of pride in building something from the destruction and profiting from it.

Check out our review of Knifeboy for something a little different HERE!

As Far As The Eye