Despite growing up in the 80s and 90s, I never got to play any table top games. Mainly because I was a loner who never had friends, but they have long held an appeal to me. Laying your fate in the hands of the gods and the turn of a dice.

When the chance came along to review Deathtrap Dungeon on the Nintendo Switch, I jumped at the chance.

Originally released on PC through the STEAM store, this trilogy of games based on the books of the same name were surely made for a console like the switch. But how do they fare? Do they pull you into the world and have you holding your breath as you watch each numbered cube tumble over and over desperately hoping for a positive roll, or does it fall flat and leave you about as entertained as a teenager playing Yahtzee with this grandmother?

Played from a top-down perspective, you progress through the Deathtrap dungeon via a series of choices. Much like in any good RPG book or tabletop game.

You reach a corridor, you can go left, right, or open the door in front of you.

There are the options you will see, and you can navigate with both touch screen controls or the joycons/controller.

I really liked the way the game played. It was simplistic, but the choices you were presented with were certainly difficult. Especially as you got deeper into the dungeon and your health was creeping down.

I found the first game the most entertaining. The second and third were fun, but I was not as big of a fan of the sudden deaths that lurked everywhere. I found the jump from subtle stamina depletion to instant death too much, and it removed the enjoyment from the game. Especially as death returned you the start of the dungeon.

The dice mechanic was fun, and as you would expect, the core element of the gameplay. During your walk through the dungeon you would come across numbers different moments where your fate would be decided by a single role.

You had two sets of dice, one for skill and one for luck. Depending on the challenge, you rolled one of the two sets. Rolling was done either by pressing ‘A’ or through the touch screen controls. I tried to shake the switch (I played this in handheld mode) to see if that would roll the dice, but it didn’t seem to work. It’s only a tiny thing, but would have been a kind of nice.

The mechanics never really varied during the three games, and this was nice as the first game captured everything you would need and I’m glad they didn’t dilute the core gameplay elements just to give something extra to the digital experience.

The interactions during each playthrough were random, but the dungeon itself was a fixed thing. So when you died, and you will die – you start with 9 lives – you didn’t have to worry about learning a new route through. Yes, you could explore different avenues, but the core route never changed. I had a few tough routes where every single interaction was a strong enemy encounter, and I had a few were the first three encounters gave me full health restoration cards.

This kept the game interesting and entertaining.

But what about the story?

The story was weak. If I’m being honest, it was very weak. I would have liked more story to unfold as you were in the dungeon. There was some basic setup to explain why you were going into the dungeon, and back again, and then back again, but that was it. I wanted more story building moments in the game, something to pull you into the world and really care about the decisions you made. 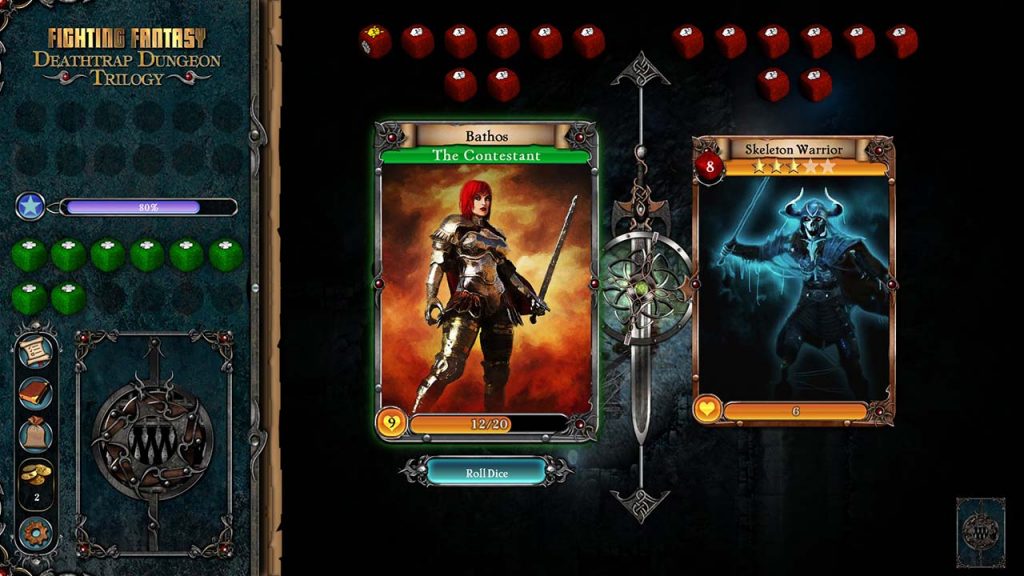 The character designs were fun, although beyond the initial selection screen you didn’t really see too much of your character due to the gameplay style. You had the classic selection of fantasy figures and while neither strayed from the cliché; it worked for what it was.

The top-down perspective of the game was a nice look, and it worked perfectly with the genre. I thought the graphics were perfectly fine. There were sharp, and the enemies were varied. The real details were in the collected cards for each enemy encountered. The dungeon looked nice and had the necessary aesthetic to get your mind into the setting.

What I actually found good was that the game didn’t spam you with too much on the visual side, and rather gave you enough to put the imagery together in your head, just as would be the case if reading a book or playing a tabletop game.

For me, this worked. For others, it might not be as impressive. I guess it depends on what you’re looking for. Personally, I would always choose story over graphics any day of the week.

From a performance perspective, the game played well. I never had any system crashes or bugs. Unless rolling 0 for three turns in a row counts as a bug, and not just my crummy luck. 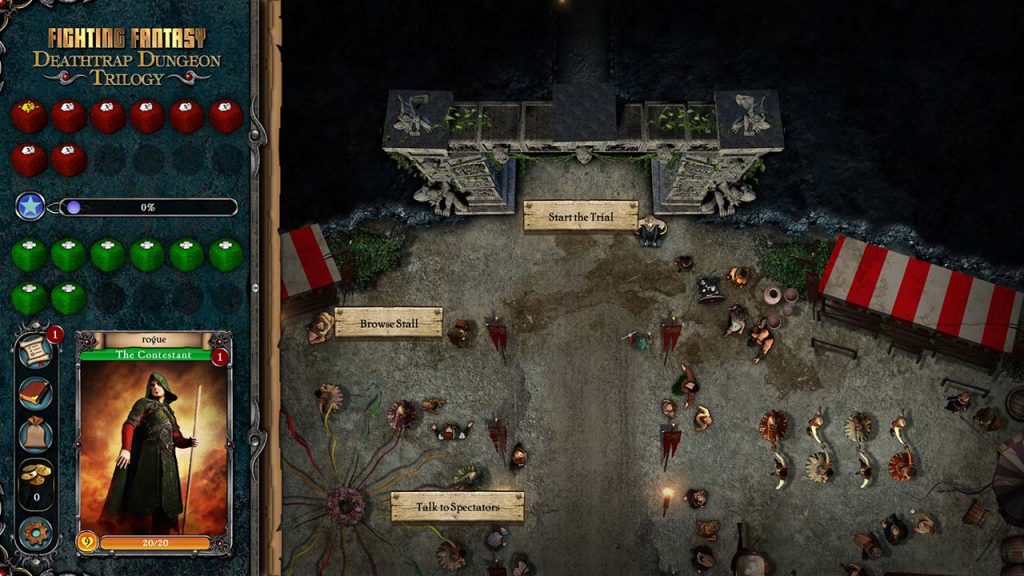 The sound was the weakest element of the game. The game replied too heavily on sound effects above soundtrack, and I think it suffered as a result. When you first start playing the sounds are interesting and fitting to the game. But as the game progresses and the sounds stay the same, it quickly deteriorates into noise, and after that fades into the background completed. I played most of the second game and all the third with the sound turned off because I just couldn’t be bothered with it.

There isn’t much more to say really because well, there wasn’t much else to listen to. 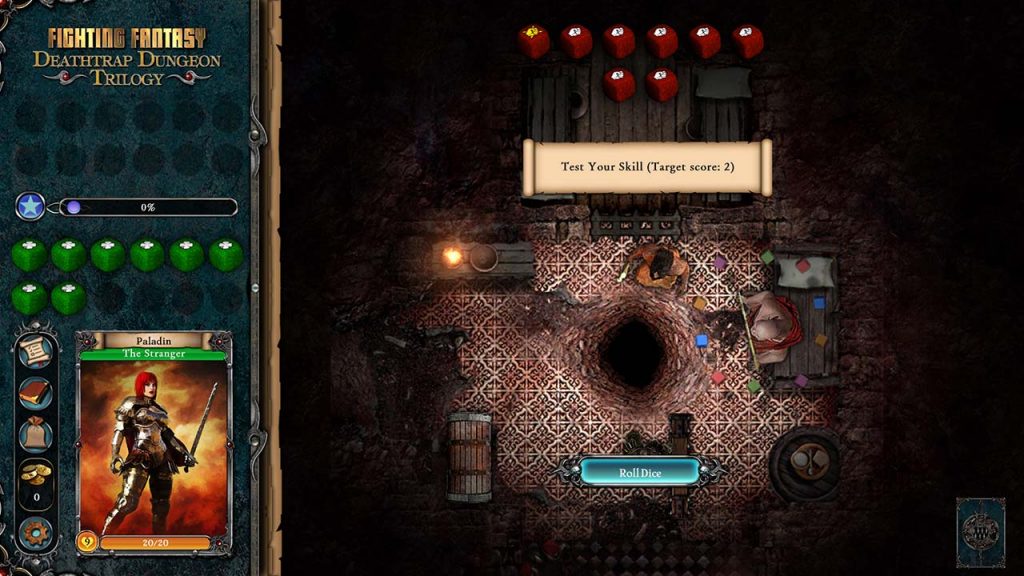 Overall, I enjoyed playing Deathtrap Dungeon, but I constantly had the feeling that there was something missing. For a game that is inspired by books and the world of tabletop games, there was just not enough attention played to story and character development. The game really suffers for this and what could have been a very enjoyable and replayable experience, fell flat.

Also, for any future games of this type I think would need to consider the multiplayer aspect and offer a broader or more branching storyline to allow groups to play together, as should be the case with games of this ilk.

If you enjoyed this check out our review of Go All Out! HERE!