Dead or School is yet another title in a long line of action platformers. When I found it on Steam I had to play it, well wait for it to get ported. Was it worth the wait, let’s find out?

Set in a Tokyo Japan, where most of the world’s population is infected with an unknown virus that has changed them into Zombies. The remaining human populace was forced to live deep underground to survive. 78 years later, an energetic teen who happens to be a dab hand at killing Zombies, learns about Schools and is given a school uniform. She makes it her own personal quest to make it to the surface and get to school and become a school girl. Along the way, she meets other survivors who will help her on her mission.
The story is as mental as it seems and straight out of a graphic novel. It works fantastically and fits with the art style of the game. There are a few twists in the story but don’t go looking for something too deep. 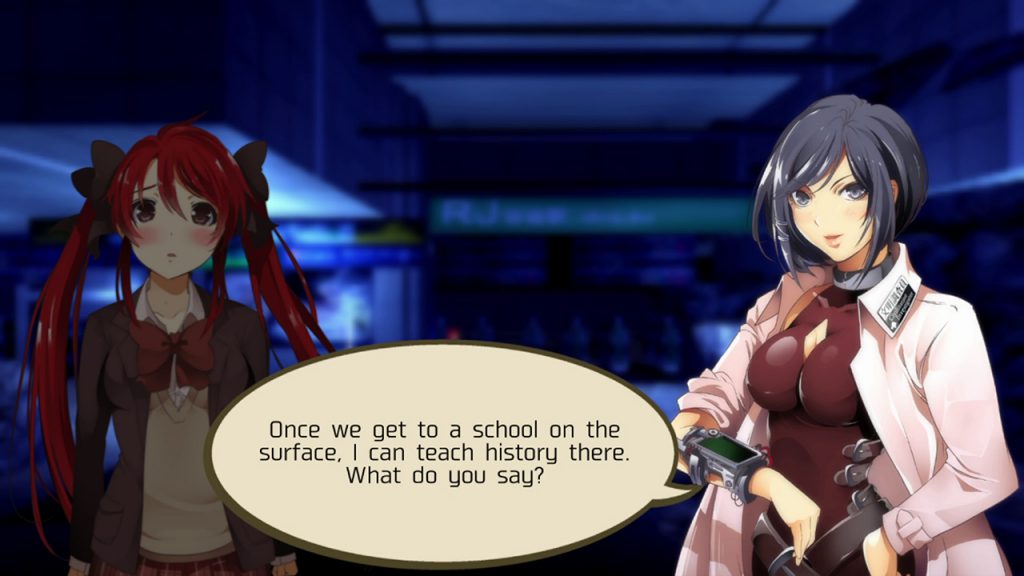 Gameplay is simple, frantic and fun. Dead or School is your classic action platformer with all the jumps, puzzles, fighting and bosses. The game has some light RPG element, lots of weapons and customisation of weapons. There is a stamina bar that depletes from running, jumping and using weapons/skills.
The game is based in the underground railroads of Tokyo, getting from one station to the next on Hisako armoured train that works as the game hub world. Once at the station the fun begins. The game is action based with Hisako having access to three weapons. First one is a melee weapon, second is a gun, and last is a heavy gun. The melee weapon has a limited hit counter, just like the guns with the bullet counter. Once they hit 0 the weapon is no longer useable, however, save points replenish these.
The save points are vital in the game, as enemies drop guns and attachments these are the only way to change them, along with this there is a shop and save. Save points are the only way to heal. Weapons and attachments have a weight attached to them this adds a bit of management of weapons and attachments. Speaking of weapons, there are plenty of them. Weapons can come with a bonus stat. Weapons can be upgraded to boost stats and change the bonus stat. This will give you a random stat. Attachments come with an array of buffs, from just a basic increase to a stat to adding a drone that will help Hisako fight. This allows for a wide variety customisation.
There is an RPG element to the game. Every enemy and quest gives exp. once leveled up there will be a stat boost i.e. health and weight capacity increase. Along with a point to spend in one of three skill trees, the trees are based around the weapons. The first point unlocks the weapon skills, for example, the melee weapon will unlock a spin attack that uses up stamina. On the map that is displayed, it shows distress beacons of humans that can be saved as well as souvenirs to collect. Doing so will unlock skill tree points and stat upgrades. Along with the these survivors and humans will be on the train with you.
There is however a problem within the game, there are too many issues with hit box detention. Too often Hisako will stop moving as if hitting a wall and having to jump. While jumping there are again too many places that Hisako will get stuck in the jump animation, it is annoying. These are problems that can be resolved with a patch or two. I know they made Dead or School on a budget but this is the simple things that should not be there especially with how frequently it happens. 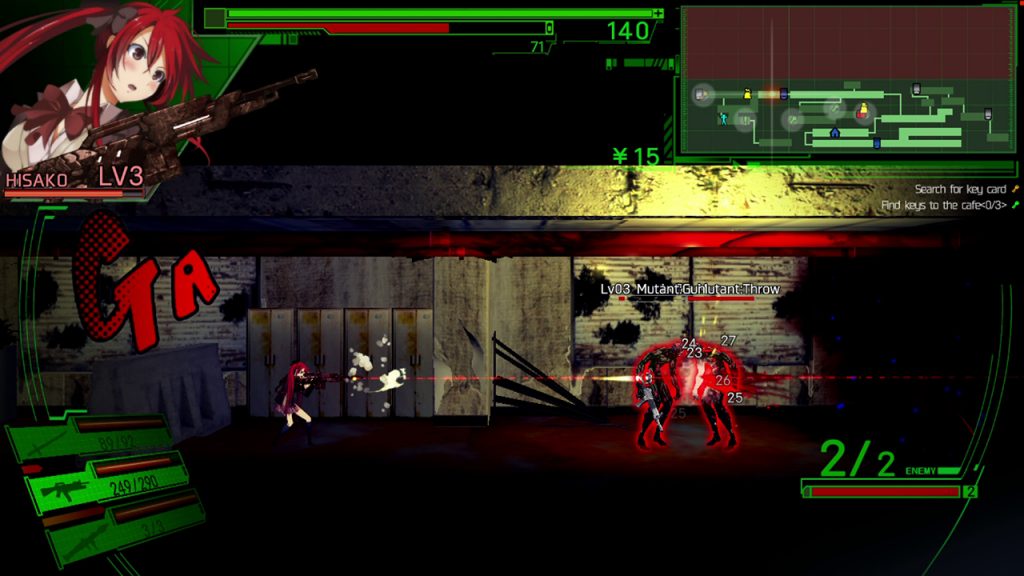 Visually, Dead or School is a mixed bag of good, bad and interesting. The visual novel aspect of the game is amazing and looks great. Parts of the world look like something from the PS2 era. This is not a bad thing. The character models look decent, if not a little flat at times. The HUD looks really cool; it looks a little intrusive at the start but grew to like it. In the top left of the HUD is Hisako’s picture with whatever weapon she currently has equipped, Also when reloading the picture changes to show this, it was a nice little touch When the gun shoots there is a visual cue, like out of a manga, not to mention how zombies jump from the HUD frame to the level. When there is plenty going on in the game, it gels and comes together. Just don’t be looking for amazing graphics. 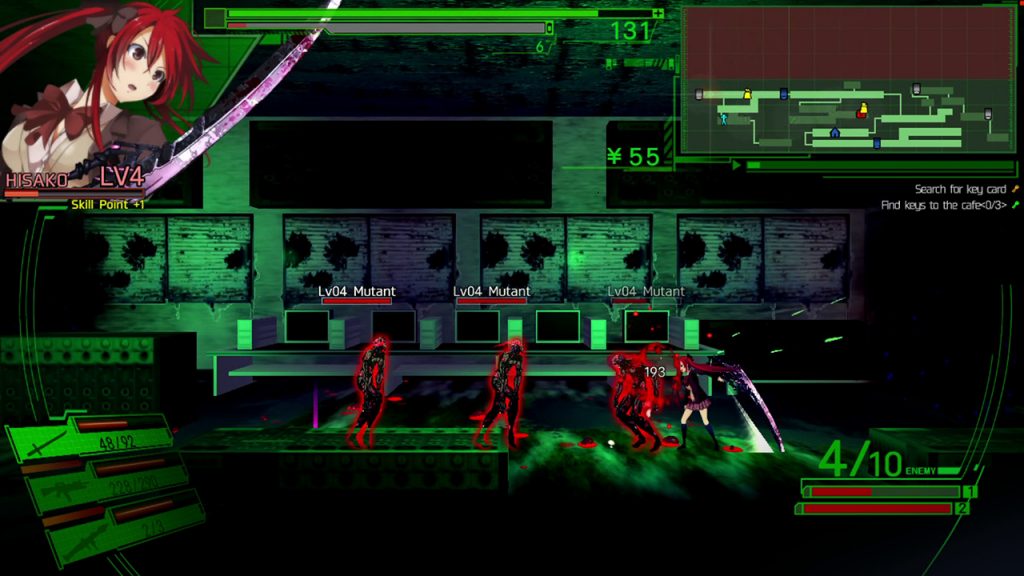 The sound design is good, it does enough to make the fights tense, even when they are tense enough alone. The weapons sound great, each explosion and bullet shot sounds weighty, but also somewhat muffled at the same time as if underground. It does a good job of a small budget. 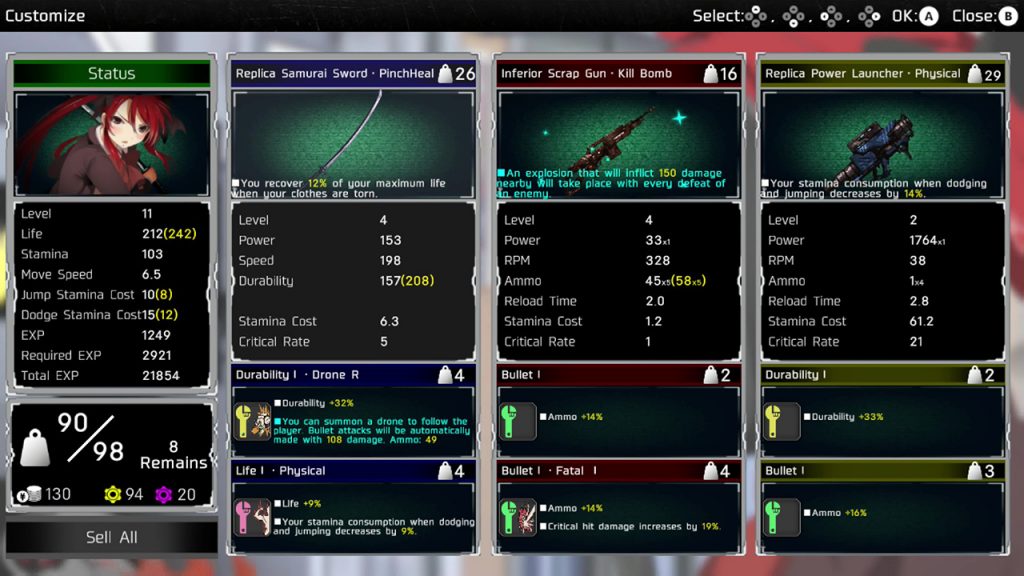 Overall, Dead or School makes good use of a small budget and delivers a game that on the whole plays well. There are a few problems that can be fixed. It does not look the best or sound the best. However, it draws you in with level design and customisation, also there was a desire to get to the collectables and see what bosses you will encounter.

I recommend this one but maybe hold off for a patch to fix the movement problems.

If you enjoyed this check out our review of Romance of the Kingdoms XIV for something different HERE!K