Review Rush was supplied with the review game.

Crusader Kings Board game is a licensed product from Paradox Interactive of their PC title Crusader Kings. The company taking on the task to bring it to table top was Free Leagues.

Crusader Kings board game was a Kickstarter Campaign that started in May 2018 and ended in June running for 31 days, with a target of £42,685 (current Exchange rates from Swedish Krona). The campaign smashed that target and raised £397,896, with an estimated shipping date of November 2019. All in all, an excellent campaign.

The game aims for you to spread your influence over medieval Europe and be the first to get to Jerusalem. To do this, you will need to groom your family, develop your domain and defeat any who stand in your way – by any means possible. 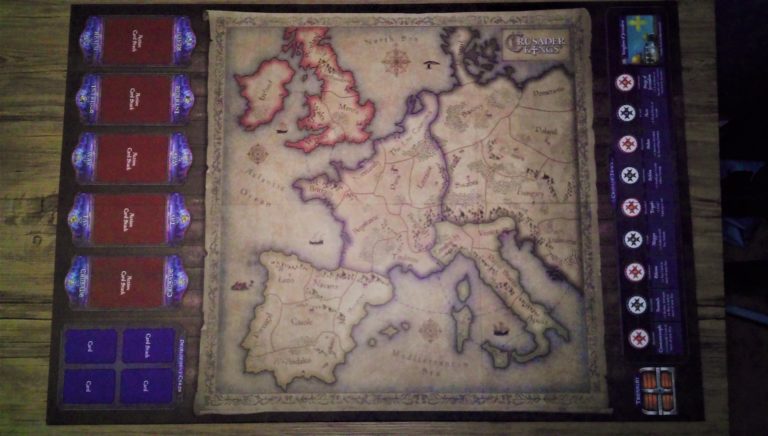 Here’s the fun stuff, the game itself. Let me regale a fable of the day on which I lead my army to victory on the Crusades. It was a warm summers evening, and I decided to have a game of Crusader Kings with my wife and one other. After explaining the basics of the rules, we set off playing, after almost four quick hours (describing rules over and over) I claimed my victory. My family had taken over a large quantity of Europe, and I had won and finished my Crusade to the Holy Lands. There were heated debates, failed assassination attempts, deals as well as other unsavoury acts plotted. Even though the game ran on longer than it should we all enjoyed it, however, it was exhausting explaining the rules over and over. It was especially hard for my wife who felt overwhelmed by the sheer amount of information she needed to process.

The game comes with a 34-page rule and scenario booklet, so making sure you know all the rules on your first playthrough is not going to happen. The rules are very detailed; it’s possible to marry (even a horse), overthrow, murder, bribe, Incite unrest, build, have kids, invade, and pillage to name but a few things. Just like its video game counter-part there’s plenty to do.

The game flow is split up into three Era’s, and every era has three rounds containing two turns each. Making for eighteen turns to finish the game. The game flow is pretty simple at the start of an Era the player will draw eight cards, only six will be played. In each round, the players pick two cards and decide what order to play them in, one card per turn. Once played, the player needs to select one of the actions on top of the card to carry out. After that, resolve the event at the bottom of the card.

The round is split up in a number of phases;
Dynasty Phase – Here, the players attempt to marry family members.
Plotting Phase/Turns – As described above.
Upkeep Phase – Three things happen here. Firstly, Pay one gold for each troop on the map. Secondly, Demobilisation removes any troops from any controlled areas. Lastly, Age your King, at five ages, the King dies, and a successor takes his place.
After the last round discards all cards, and counters that are no longer needed.

That is the general flow of the game. There’s a lot more to the game than these simple steps, but if I were to go through them all, I would bore you all. OK… I lied, there’s one more part I need to talk about, the expansion; Councilors and Inventions. While playing with the expansion, it opens up a whole new way to play the game. Twelve new miniatures are added to the game, these miniatures disregard any actions on the cards they are placed on and instead have their own rules. For example, Court Physician – When the Court Physician is mobilised in a territory, and the territory is lost, the player does not lose the foot soldiers. Instead, the player can mobilise any territory under their control and place the soldiers there. Each of the new miniatures creates new and beautiful ways to change how the game plays out – It also adds more rules to learn, but well worth it.

Game Overview;
Number of Players,
3-5
Game Time,
2-3 hours
Overall ease of the rules (on a scale of 1-5, 1 hard, 5 too easy)
2 – This is only because there are so many of them, and it will take a few playthroughs or manual reads to fully understand them all. 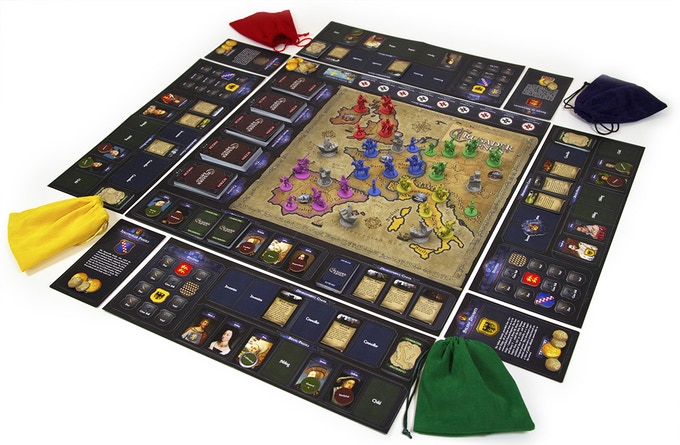 Crusader Kings comes with a vast array of content;

Rulebook – Glossy booklet with very detailed and easy to read rules and scenarios.
Game Board – The board feels sturdy and well made, with an excellently detailed map of middle age Europe. Due to having to put models on the board, it is massive, it just managed to fit on my table.
70 Plastic Figures – The figures were okay looking, not as detailed as I was expecting after looking at the Kickstarter page. Could be so much better.
5 family Boards – Same quality build as the board and again big boards to fit a lot of cards on.
317 Cards – Each of the cards feel robust enough that they will not rip without being forced. They’re well made and the artwork is beautifully presented on each of them. The total includes Characters, Action, Dynasty and developmental cards – each set varying in size, but all feel great in hand.
378 Tokens – Like the cards they’re all well made and robust, these are all made from cardboard with a smooth finish and beautiful artwork. There’s a vast array of uses for these tokens also.
6 Token Bags – Felt bags of different colours
5 Player aids – Quick-to-hand rule cards.

As you can see, Crusader Kinds comes with plenty of content that is mainly well made and of good quality.

I personally enjoyed my games with Crusader Kings, Would I compare it to the PC game? No that is unfair there is more to do in the PC game than here. This is a stripped-back version that will keep you focused on the main areas of the gameplay.

Is it for everyone? Again I don’t think so, my wife found it very hard to get to grips with the game, whereas the other person found them more manageable. I would aim to play this with people who have played board games before.

Time is a factor also, three hours is an extended period, so plan when and where to play the game accordingly.

Overall it is a decent adaptation of a PC game into a board game style, making the game a few hours rather than days to finish.