Bloodstained: Ritual of the Night, is set in the early 19th century and follows the protagonist Miriam, an orphan who was taken in by the Alchemists’ Guild. The Guild experiment on her with demoniacally-powered crystals called Shards, granting her incredible power as a “Shardbinder.” Side effects cause her body to crystallise over time until it consumes her. Miriam finds solace in another Shardbringer Gebal, who encourages her never to fall to despair. Along with Johannes, a student Alchemist who has slowed the crystallisation process of Miriam’s body.

Miriam falls into a slumber, as the Alchemists’ Guild sacrifices the Shardbringers to summon the forces of Hell to scare the world away from martial gains. In summoning the demons of Hell, the Alchemists’ released an almost unstoppable torrent of destruction upon the Earth. Gebal was the sole survivor of the sacrificial summoning.

Ten years pass as Miriam sleeps; in that time, the Church was able to hold back the demons for a time but ultimately lost. Gebal leads the demons that now infested the world. Gebal kills the remainder of the Alchemists’ Guild that survived the summoning and raises a demonic castle, Hellhold, so that he can wage war against humankind for what they did to his kind. It is up to Miriam to stop him and save what’s left of the world.

Bloodstained Ritual of the Night is the spiritual successor of the Castlevania series. With Koji Igarashi leading the project as well as being the lead producer on all Castlevania tiles from 2001 to 2010. Going to Kickstarter for funding as he was doing it alone, he not only got the funding he destroyed his goal. Will it be the perfect homage or will it be swallowed up by the hoards of Hell? 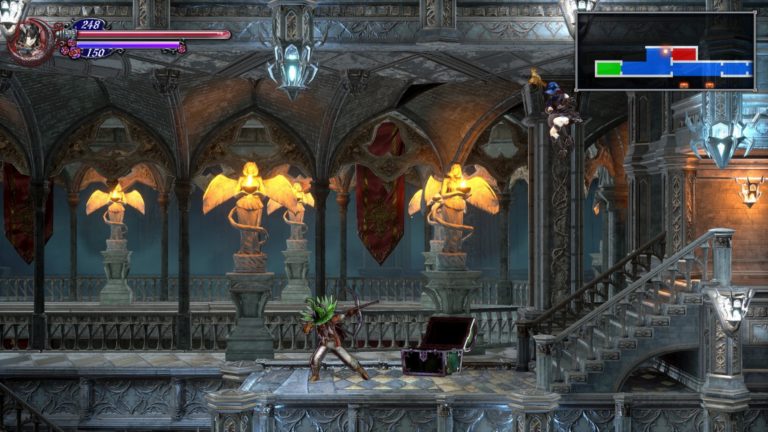 Comparing, Bloodstained, to Castlevania is not a disservice. It should appeal to the fans of Castlevania (even without Igarashi-san involvement), but with the graphics, it should appeal to the newer fans of the Metroidvania’s. It ticks all the Castlevania boxes, double jumps, platforming, swords, whips and magic. With its mix of guns, different ways to traverse the levels and RPG elements thrown in for good measure.

To describe the core mechanics, I will be rehashing the tired and tested mechanics of almost every Metroidvania games made. Here is a quick list of what to expect;

There are few extras thrown in to make it a slightly different experience than just a simple Castlevania clone;
– Shard system; this is the game’s version of learning new skills, both passive and active. These shards can also be upgraded to improve their abilities. Miriam can only hold a set amount of shards before she suffers adverse effects from them. It makes picking abilities a more tactical affair than just hoarding and changing as and when suits.
-Alchemy; where combining ingredients to make new weapons, armour, meals as well as upgrading shards. Using alchemy will allow Miriam to create a stronger arsenal of weapons, armour and accessories at no cost. Meals give a stat boost for a set amount of time, as well as a first-time permanent bonus to Miriam’s stats. To make better items or more meals, Miriam needs to collect books that unlock them.
-The store works in conjunction with Alchemy. For every item Miriam makes the store will bwgin to stock the items for a price.
– Lastly, there are tonnes of weapon types Shoes, Daggers, Rapiers, Whips, Firearms, Spears, Great Swords, Maces and Katanas. There are also around 100+ different weapons altogether. Each with there own attack type and elements. It gives plenty of choice with how you like to play. Along with the number of weapons, some books give Miriam combo attacks, these work like in a beat-em-up game directional presses followed by attack button.

The controls are tight and responsive. Once I got used to the back-step mechanic (the games dodge mechanic) I got into the combat flow very quickly. The game is purposely paced slow, and I was trying to be fast as soon as I got my head around that the game got even better. Being the type of game it is, there’s plenty to discover and lots of hidden things to find but unless you are trying to speed run the game once it is completed there is not much to draw you back in again unless you want to finish it 100%.

For one last Thank you for Bloodstained: Ritual of the Night there will be free DLC coming, as well as some paid DLC for none backers so they can experience fighting Igarashi-san as a boss (I cannot wait for this).

Overall the game is defiantly worthy of being added to the line of Castlevania games. 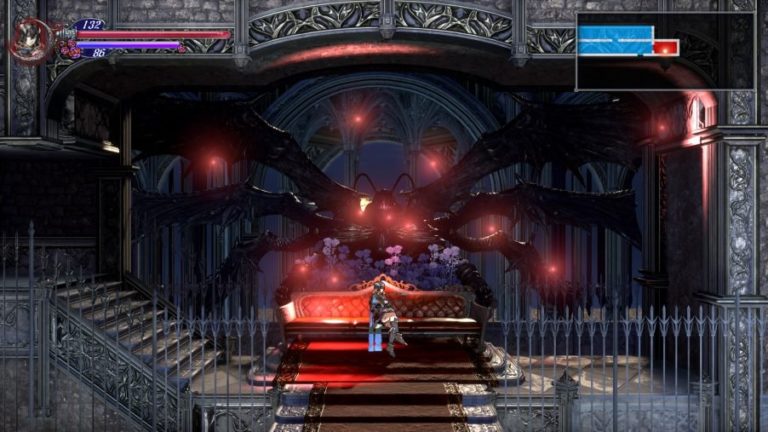 Visually, Bloodstained, had a massive overhaul from its first incarnation. The backers and fans of the Castlevania series kicked up a stink about how bad it looked, so Igarashi and his team set to improve the visuals dramatically. Now the game is a thing of beauty, from the design of Miriam through to the world itself. All of it looks stunning.

Miriam’s models move well and fluidly and genuine care and time have been given to her. She can also be customisable in appearance; this was a nice touch. A lot of the demons also look good from a visual standpoint. The lumbering armour with its ribs exposed, or the hell hounds running back and forth waiting to jump and rip off Miriam’s face.

The visual upgrades do not stop at characters; abilities look stellar when used from shooting out arrows that linger in the targets body for a few seconds without disappearing or summoning a massive tentacle to swipe the whole screen each is unique and equally as impressive as the last.

As for performance most of the game runs pretty smooth, there is however moments of slowdown, not a lot but a few. Besides the occasional slowdown, nothing else has of note happened. The overhaul was a massive boon to both the developers and Igarashi-san for listening to the fans wants and issues raised. It even happened after launching the game on Switch a week after everywhere else. The game seemed to have a performance problem, and on release day there was a tweet saying that they are working on a patch to fix the issues and are actively listening to the player base. It’s always a plus to hear from a developer, who’s just as passionate as the gamers playing the game. 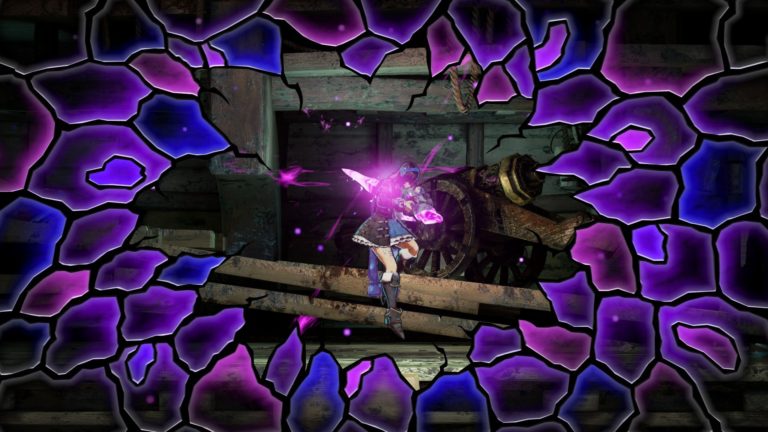 Bloodstained, has a fantastic Gothic musical score that accompanies the action and the setting perfectly. The music gives off an air of unease that I love. The sound effects are also great. From the bubbling up of monsters out of some black goo, to the sound of cogs grinding together in the background.
The voice acting is of a good standard, and all the voices sound like something out of a British period piece. It fits perfectly for the games art style and feels.

Overall the sound direction is excellent. 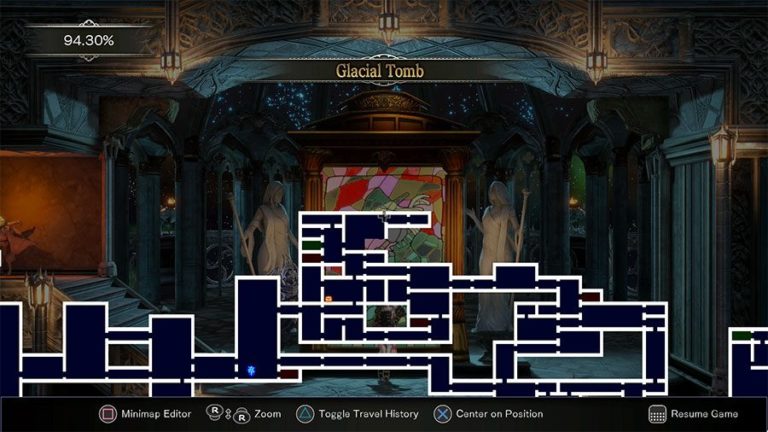 Bloodstained: Ritual of the Night is the spiritual successor Castlevania fans could have hoped for. Similar enough to bring back feelings of Igarashi-san earlier work, but with its spin on it to make it seem new.

I recommend picking this up as soon as you can, especially if you are a Castlevania fan or Metroidvania style games. If you are not this is an excellent intro into the genre.