Blacksad: Under The Skin

Blacksad: Under the Skin is an adventure game set in 1950’s New York. It’s based on the Spanish comic series Blacksad by Juan Díaz Canales. Our story begins when P.I. John Blacksad is approached by Sonia Dunn, daughter of a boxing club owner who died under suspicious circumstances. When he agrees to take the case, he gets dragged into something much bigger than he had foreseen. The interesting thing to note about this game is that all characters are animals, dressed in human clothes, and completely acting like normal humans. 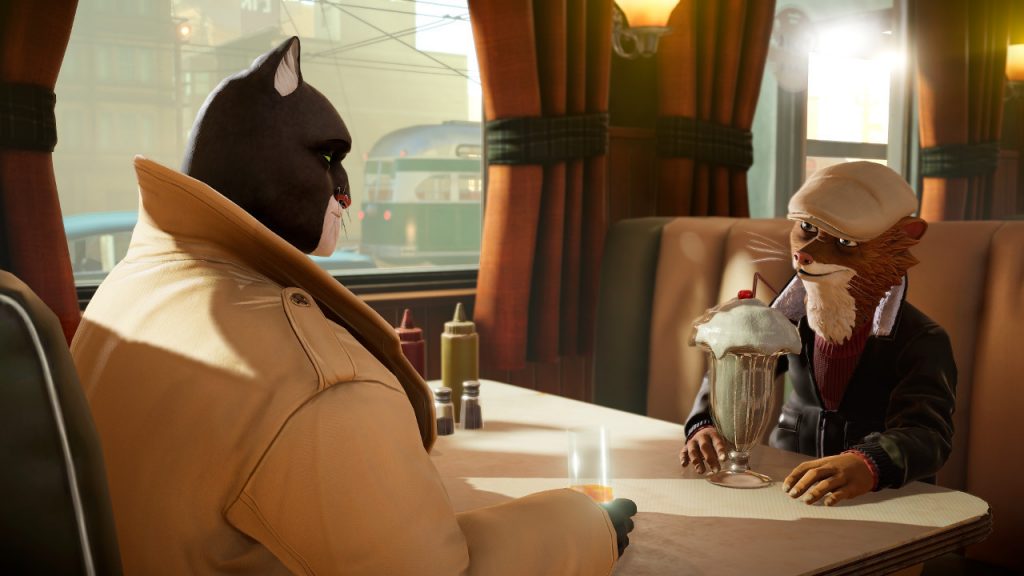 While the story of Blacksad is intriguing and it having six possible endings adds to replayability, the way they went about telling this story is honestly a bit disappointing. It’s a noir game, so it has the very corny dialogue a noir game would have. But it doesn’t really sell well when the main character is a cat in human clothes.

Gameplay-wise it’s best comparable to Detroit: Become Human, where they force you to make quick on your feet decisions and at the same time let you choose how you walk around and explore an area for clues. The only difference with Detroit, though is that the button prompts do not always work. You sometimes have to make important timed decisions, so when it doesn’t register, that’s very annoying.

Another questionable decision for me is that the game doesn’t have an inventory, it does have a journal, but there you can only see clues that are linked to people already. If you want to put clues together, you have to go into some sort of mind palace and link them by having a one-sentence summary. The only way you can see the things you find is by actually going back to the location where you found it. 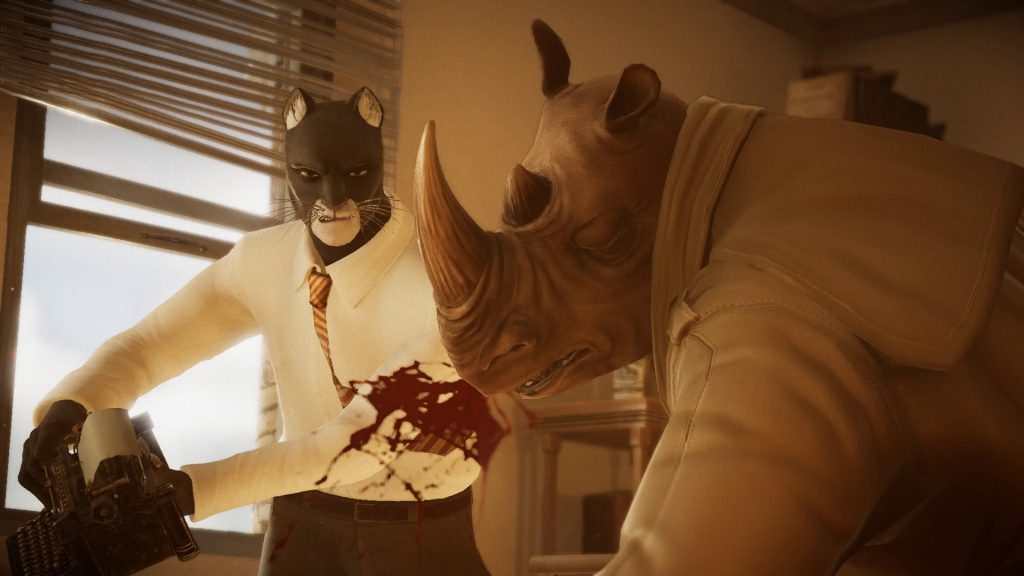 I want to start off by saying this game is horribly compressed on Switch. If you’re going to play it, you better free up 21.2GB.

I played the game in handheld mode, and the cinematography and direction of this game would probably come to its own right on a telly. It was already beautiful in handheld, so I can’t imagine what it would be like on a big screen. The opening scene was really cleverly done with the start screen literally being the first scene of the game. It really makes you feel like you’re in a noir movie. The only thing that breaks that feel is the many, and quite long, loading screens.

Another thing that breaks the beautiful visuals is the fact that cutscenes don’t always seem to be fully rendered, and the camera sometimes doesn’t want to work. This could be because I was playing handheld or maybe they didn’t put as much work in the port as they did in the original release on PS4 and Xbox?

There’s one more thing that needs to be addressed cause I personally think it’s very important in games. This game has no subtitles, not even an option to turn them on. For me, this is a deal-breaker. In this game, especially because the music volume is quite loud (and no way to turn it down). 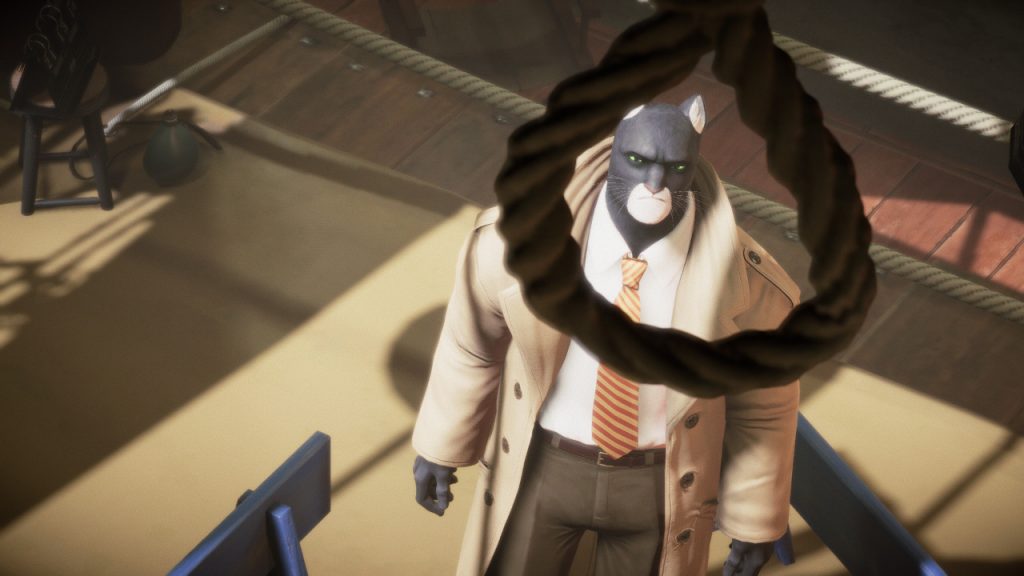 The thing I immediately noticed the first time I played this game is the music. It’s absolutely amazing. It shoots you straight back to the 50’s with its jazzy, upbeat soundtrack.

I’ve also talked about the script before, and while it may be corny, the voice actors really try to sell it. Especially Blacksad’s voice actor does a great job at making you forget that he’s actually a cat. The deep gruff voice is everything you want from a tough P.I. in the 50’s.

The only point of notice I have about the sound design in this game is that the punches sound like they come from a 50’s movie as well. I don’t know if this was intentional to create that true 50s movie feeling, or if they screwed up. Either way, it really makes the fights tons funnier than they should be. 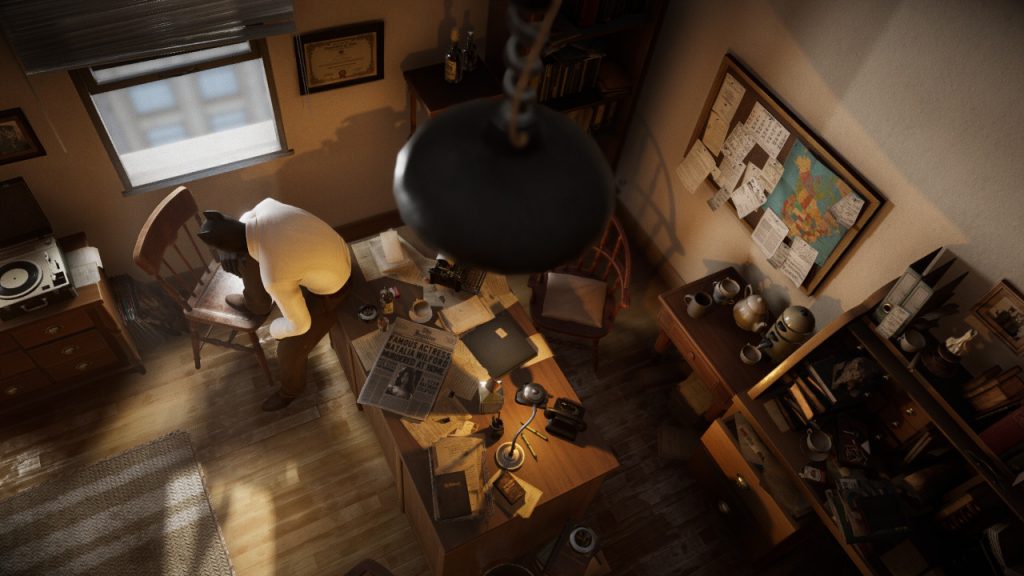 Blacksad: Under the Skin is a visually beautiful game that takes itself a bit too serious. The plot is intriguing enough to keep everyone playing through it for the first time interested. Unfortunately, it also has it’s fair share of technical issues, which is a shame because the voice acting and music are fantastic.

If you enjoyed this one, check out our review of My Brother Rabbit HERE!

Aluna: Sentinel of the Shards

Atelier Sophie 2: The Alchemist of the Mysterious Dream