Bad North is an alluring, well crafted and tense real-time strategy game developed by Plausible Concept and published by Raw Fury. You must defend multiple islands against the relentless invading Viking onslaught while being in control of various Commanders and their accompanying squads of soldiers who fight for you until you defeat the hordes of attackers and control the islands or until their untimely deaths. It’s up to you how you achieve this – you can play tactically and plan your defence or face the invasion head on and take the fight to the enemy, just be prepared for the consequences. 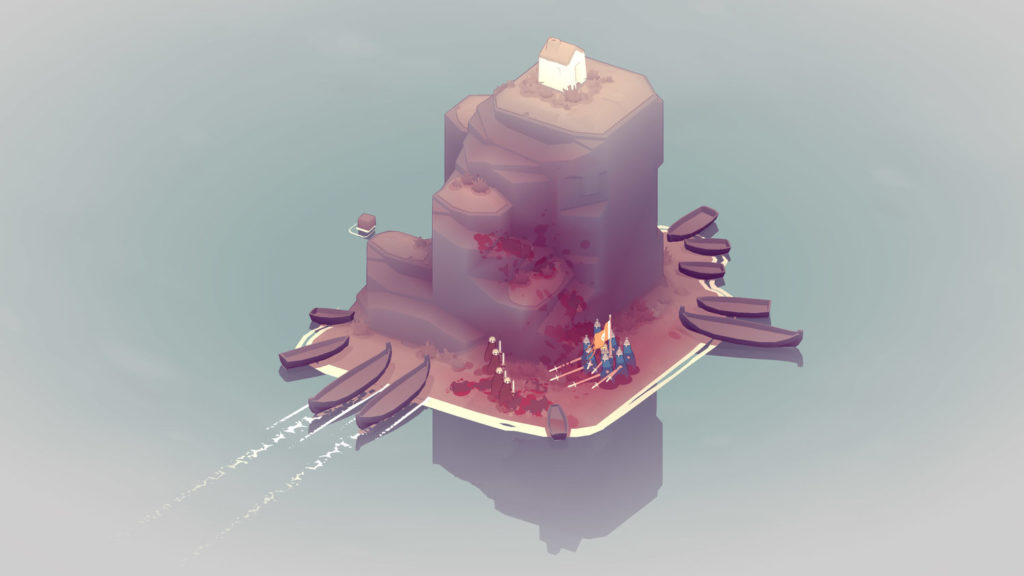 The addictive nature of Bad North finds it’s way quite early in the game. The beginning of the game presents you with your home island (a green plot with a few houses and shrubs surrounded by sea) and the first two commanders. The management of your commander’s and their squads is very simplistic and easy to use with the accompanying tile-based system. The battle commences with a manageable flow of enemies arriving by boat and to the sound of a war horn signalling the arrival of the Vikings. Your main objective is to repel the invading attack and prevent the enemy from destroying the houses that are on the island. You start with two squads of swordsmen (blue dressed soldiers) against similarly equipped invaders (black dressed soldiers). After you have won this battle you will receive gold coins from the remaining houses, the number of coins received depends on the size and quantity of houses – you use these to assign classes, e.g. Infantry, Archer or Pike or upgrade your squads and their skills – how you distribute them is up to you, however be careful as upgrading is expensive and if one of your commanders die during battle they are lost forever, including their upgrades and skills.

One of the best features of this game is the ability to choose where you attack, after a battle you are presented with a map divided into numerical sections, these sections can contain up to three islands all individually named and ranging in size. Again, using the turn-based system once you have successfully defended an island that part of the map closes off, you must wait for your next turn to defend, where you choose is important as there are certain islands which contain special items or Local Commanders to whom you can recruit. However, if you skip a section of the map that part is closed off and so you cannot go back.

As you progress the difficulty of enemies faced increases along with the size of the islands and the number of houses you must defend. Thus it is important to keep your squads well equipped and use their skills and upgrades regularly. At first I chose a tactical play through where I kept Archers up high and infantry units on the ground, at times I had enemy squads attacking from all sides of the island, but that just made it more fun, I actually found myself talking out loud, barking orders to defend certain places while sighing and shaking my head when I lost Commanders – it is really addictive! 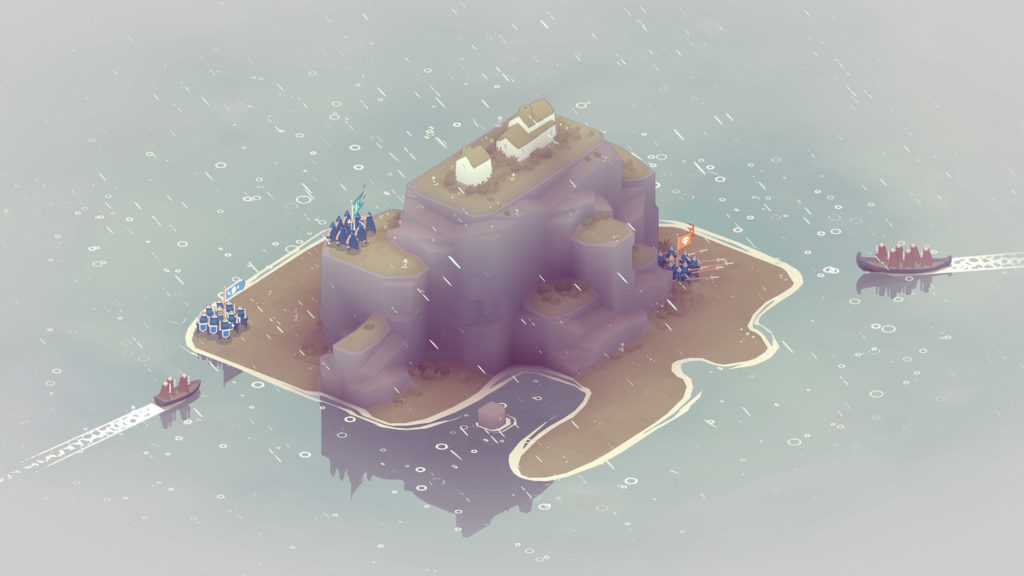 Visually Bad North is appealing for the price. Its graphics are what you would expect for a game below £20, the graphics themselves have a cartoon-like nature when it comes to the soldiers and houses however I can appreciate the little pixel like flicks of blood that appear when a sword strikes an enemy.

Controlling the squads themselves is easy as mentioned with the tile-based system, with a left click you select the squad and can place them on any free tile with a right click – they will then attack any enemies close to that tile, the movement of the squad from tile to tile is actually quite fast. Navigating the island is smooth in itself with the mouse wheel being used to zoom in and out. 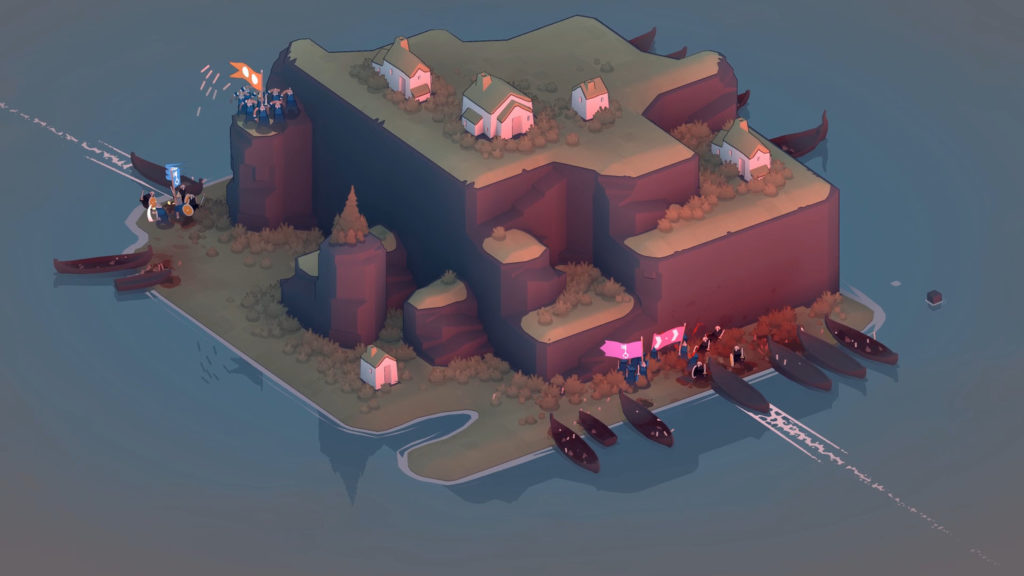 The game menu screen music has an eerie Nordic feel to it with what I think is dramatic, but a tense combination of the cello and violin, it helps you to get a feel of the type of game Bad North actually is. While the grunts of soldiers being attacked, the sound of arrows getting ready to fire and hitting shields along with the jingle of armour and weapons as they move give it a more realistic listening impression – it’s these little details that make me appreciate it more. Not to mention the cheerful jingle that sounds once you have won an island. 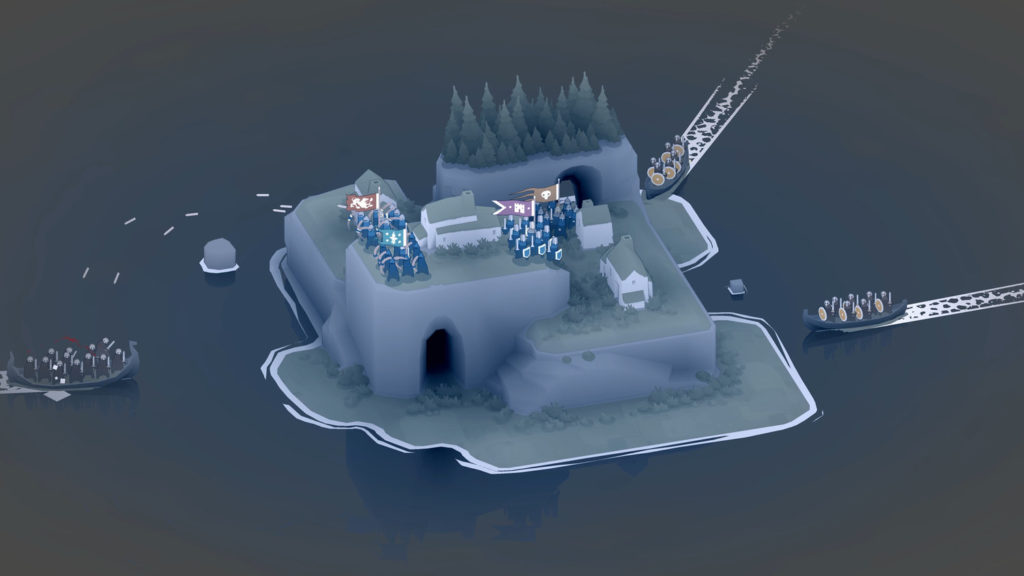 In conclusion, Bad North is a fantastic real-time strategy game. The ability to be able to strategise your squads of soldiers, attack with tactical prowess and decide where to repel the invaders makes this game all the more realistic and most importantly – fun. I like the cartoonish style of the visuals it doesn’t make the game bland or feel unrealistic in any way if anything the colours make it more appealing to the eye and more enjoyable to play. After playing for some time, I still find myself wanting to go back and start a new campaign so that I can outdo my previous stats and this time maybe have all of my commanders survive!

Is It Wrong to Try to Pick Up Girls in a Dungeon? Infinite Combate