Azure Lane started its life as a mobile shoot-’em-up of sorts. Now that it has made the jump from mobile to console, it was time to give Azure Lane the 3D treatment. Was it worth the effort? Let us find out.

When on a routine training mission, two new comers Shimakaze and Sugura of the Sakura Empire’s naval fleet are attacked by the mysterious Sirens. The Sirens ships drop strange glowing cubes. So the Sakura Empire decided to hold joint-nation military exhibition. With the sole purposes of using the other nations to help collect and analyse the cubes. This is only the beginning of the mysteries that unfold.

I will not lie, the story is far from special, in fact it is somewhat mundane. There are no real plot twists or things that are unexpected. The silver lining is that some of the writing and the personalities of the characters are great. 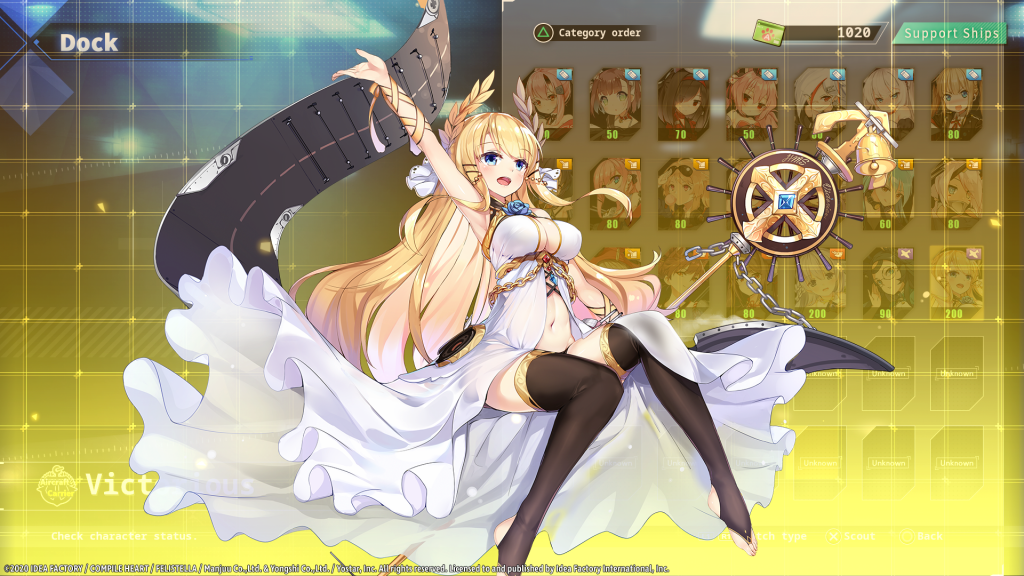 The game has been re-imagined from its mobile days; it is now a 3D 3rd person area style shooter. This is a lot different from its humble mobile beginnings.

Each of the characters in the game are of real life war ship classes that are attached to the female characters, allowing them to fight and glide above water. I know it sound weird…well it is but they look cool. Weirder still, only females can have a Ship attached to them. Let us get right on to the good stuff.

The controls feel great here with simple controls and plenty of on-screen prompts that are easily seen on the HUD. It is great that the controls are tight, and work well as fights can get hectic quickly. There will be ships coming at you, bigger Boss style ships shooting at you, and then there can be multiple other character ships attacking at the same time. In-spite of all that is going on, it never felt too overbearing and soul crushing.

At least you are not alone in the fights two other Ships can join your team. These Ships work independently, mostly, from your playable character. There are also support Ships that can be utilised to give heals or buffs etc. There is a sizable roster, with over 25 playable Ships and over 30 support Ships. This allows for great customisation with a fair amount of replay though out the seven chapters.

Between fights there are a few other activities to do on the world map. Firstly, the player can move around the map with a Chibi version of your preferred ship to collect parts and blueprints. There will be events, these range from Visual Novel style talks to fights, as well as side quests. Then there are the main fights that advance the stories. It is a simple loop and if you are like me – a lore nut and do all the side events; they do a good job of character development.

Each playable ship’s armaments can be customised by buying parts with funds/rewards collected after fights or built using blueprints found on the map. Depending on the type of Ship used it will vary the type of armaments that can be equipped. There are a lot of weapon classes here. Each weapon can also be improved to increase parameters like power, for example. All but the main weapon is on cool downs with an optional consumable, this could be a plane that supports the Ship in battle. The Ships also level up, making them over all stronger, also a special attack and a powerful buff or de-buff that can be used.

The game plays well. There are plenty of Ships, loads of weapons and a fair enough of things to do in the game. I really enjoyed playing this and it is soo addictive, it is unreal. 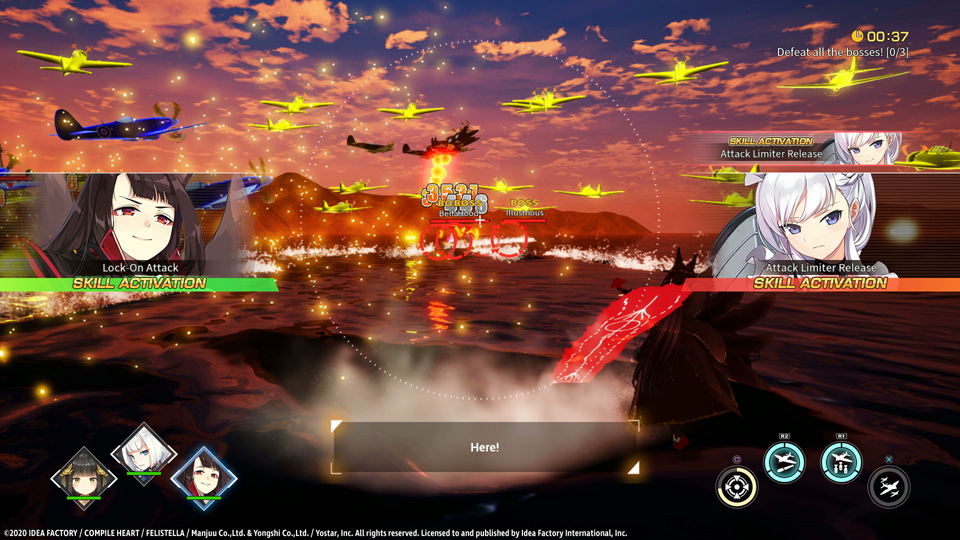 Graphically, Azure Lane is a decent-looking anime style arena shooter. The Ships all have a varying degrees of anime feel to them, both in the game world and the Visual Novel sections. I feel as though If Idea Factory wanted to be a little less censored with the Ships designs, with some clothing worn you could just imagine bits that look like they have been forced in. I am not looking for revealing anime girls but I felt as if some characters where tampered with. The area part is just water and some islands, nothing amazing and the world map is a 2D Chibi version of the main character that you picked. Overall, the graphics are fine, not the best but far from the worst.

There were no performance problems found. 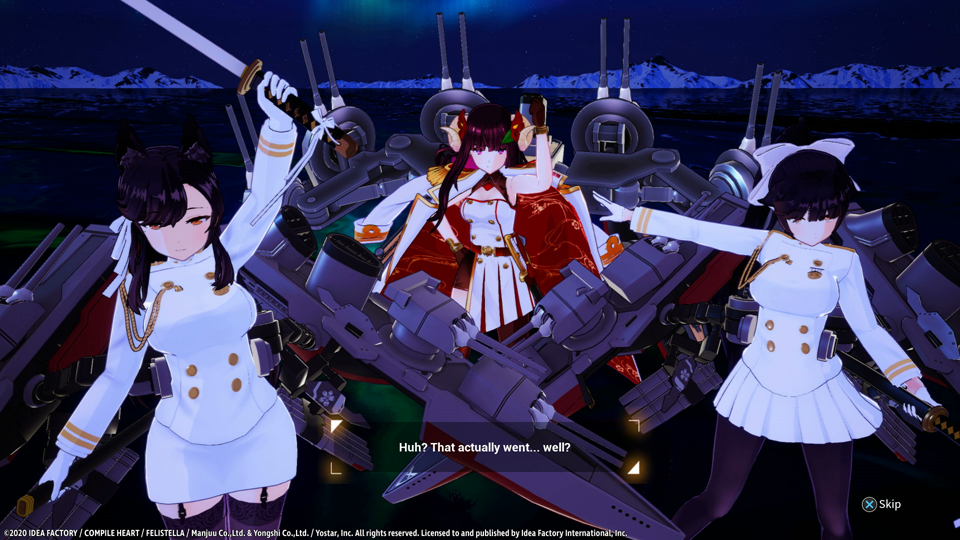 Sound design is decent, while in a fight there is so much going on around the characters it is hard to pick out individual sound effects. However, this makes me feel like it was done on purpose to make the game play more hectic and intense. It works as there is no time to stand still, it is just go! I would imagine real warfare being this disorientating at times. With all If Idea Factory titles the voice acting is great to bring the Ships to life and giving them all different personalities. 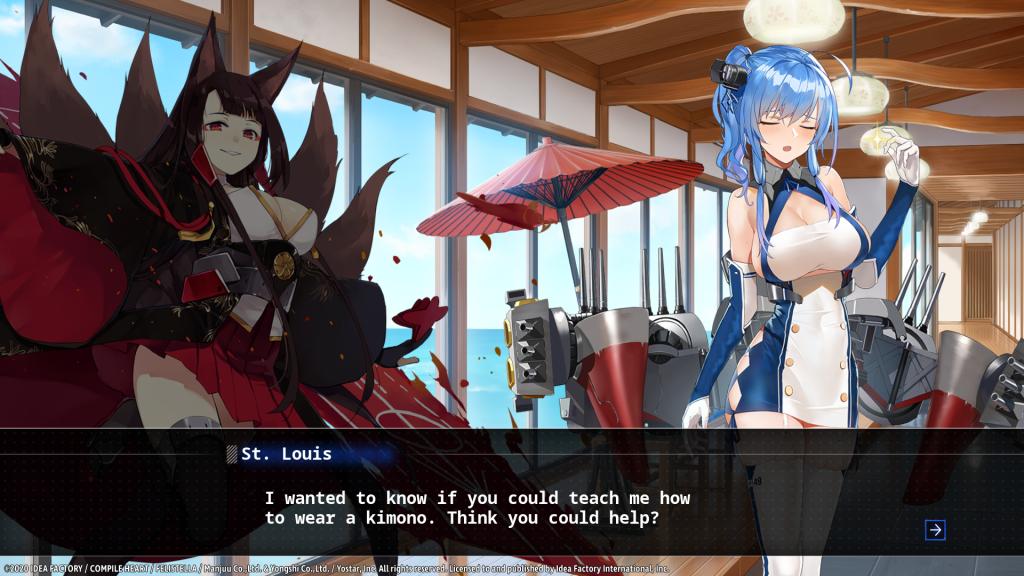 Overall Azure Lane is a decent arena shooter with an anime twist. The story is nothing special. The main draw being able to learn about the Ships with the events. The controls are tight with plenty of replay-ability. The gameplay loop is really addictive and fights are not drawn out for ages.

I think this a game to wait for a sale for; It is not everyone’s cup of tea. If you like the games from If Idea Factory, then you could really enjoy this one as it oozes their charm.

If you liked that, check out our review of 3000th Duel for something different HERE!