There comes a time in every gamer’s life when they find that one game, in their favourite series, that is a master piece. Final Fantasy has FFVII, Call of Duty has Modern Warfare, Uncharted has Uncharted 4, and Atelier has Ryza. This entry into the long-running franchise is, for a fan, perfect. I have played almost every entry and this is the best personally.

Reisalin Stout or Ryra as she is better know has spent most of her life on her small isolated island of Kurken. Ryza dreams of adventure and doing something more with her life. Along with her friends Toa and Lent, they set off to the mainland to find adventure. Once on the mainland the trio meets Empel and Lila, investigating a local ruin. They happen to be a pair of alchemists. This encounter will result in the adventure the trio have been dreaming of.

The plot is nothing out of the ordinary for Gust, but that does not mean it is bad. I really liked the story and how the characters progress. 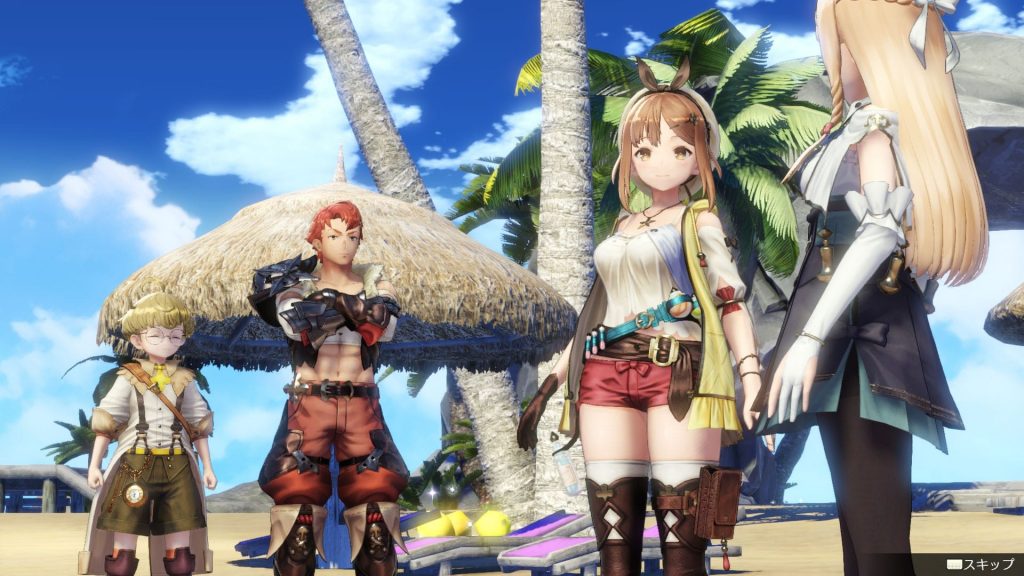 Atelier Ryza follows the gameplay loop as the previous games. You get a mission, you go out to collect items kill everything that moves, make the required items and hand them in. It’s a staple in Atelier games. However, Ryza has a surprise up her sleeve to make things feel new and enjoyable.

Let’s start with the main focus of the game; this is the collecting of materials and creating new items, with alchemy, as well as time management. In previous series installments each of the quests or side-quests have a time limit. Time passes with collecting materials and moving from area to area. There has to be some forward planning to make sure that deadlines are not missed. So the first significant difference is a simple one, and there is now no time loss when collecting materials from the world. With time now, not a factor with collecting materials, the missions seem to be less rushed and more of a relaxing affair. It has been a great change for the series and an excellent way to ease new players into the franchise.

The alchemy has a major overhaul and the most significant change within the game in how it works and looks. The first change that anyone familiar with the Atelier games will notice is the look of the alchemy table. At first it will seem daunting with interconnecting nodes and some being locked. On the most part, these other nodes can be ignored to finish the quests. If like me you need to have the best of stuff, then getting to grips with adding extra materials to improve its stats or even change the item entirely is essential. If you are struggling or do not want to take the time to get to grips with the system, Gust added an auto-add function that will make the currently selected item, once or multiple times — providing that the materials are there. The quality of life changes are great with auto-add again makes the game more accessible.

The battle system has a few changes;

The rest of the mechanics are similar to other JRPGs, enemies roam the world, hit them get a preemptive fight, and attacks are turn-based. These few listed changes make battling loads of fun and more engaging. In regards to other Atelier games, I felt this one too be a massive leap from its predecessors in the right direction. 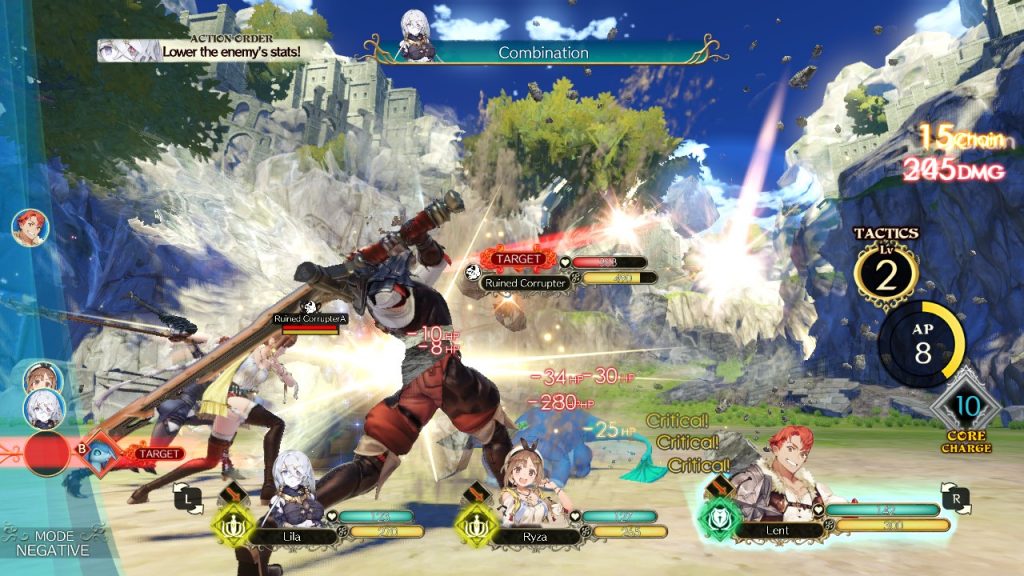 Atelier Ryza is an Anime filled joy to view. Gust has designed a new graphics engine for this entry, and oh my it has been worth the time and effort put in. The game is gorgeous, highly detailed and fleshed out. Compared to every other Atelier game, this one blows the rest out of the water.

The world itself is full of life, with more accents on screen than before, looking lovely. The colours are bright and bold. The character models are all more detailed and keep the anime look alive. However, they are very wooden still with the animations. It would have also been good to have more enemy types in the game, as there is a lot of repetitive battles.

The magic or items used in battles are great, massive explosions, light shows and better animations. Every part of the graphic design has been upgraded. Even the alchemy board has had a beautiful new overhaul.

There were no bugs that I encountered or anything that I noticed that was noteworthy. 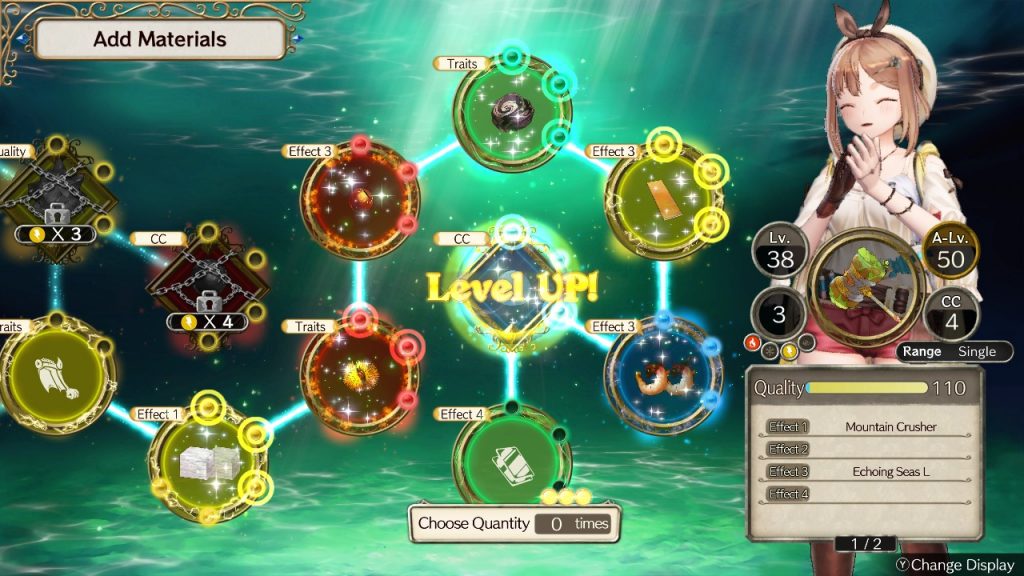 The audio design has a higher sound fidelity. The soundtrack is excellent, however, a little short in this entry. This has always been the best part of the Atelier games in terms of sound design for me. Here it does not disappoint just wanted there to be more variety. The sound effects seem to be reused for the most part. I would say due to most of the enemies being the same from previous games.

The voice acting is, as with most of Gust’s games, outstanding with the option of English and Japanese. I opted for Japanese as usual, but the English voice actors do an exceptional job also. 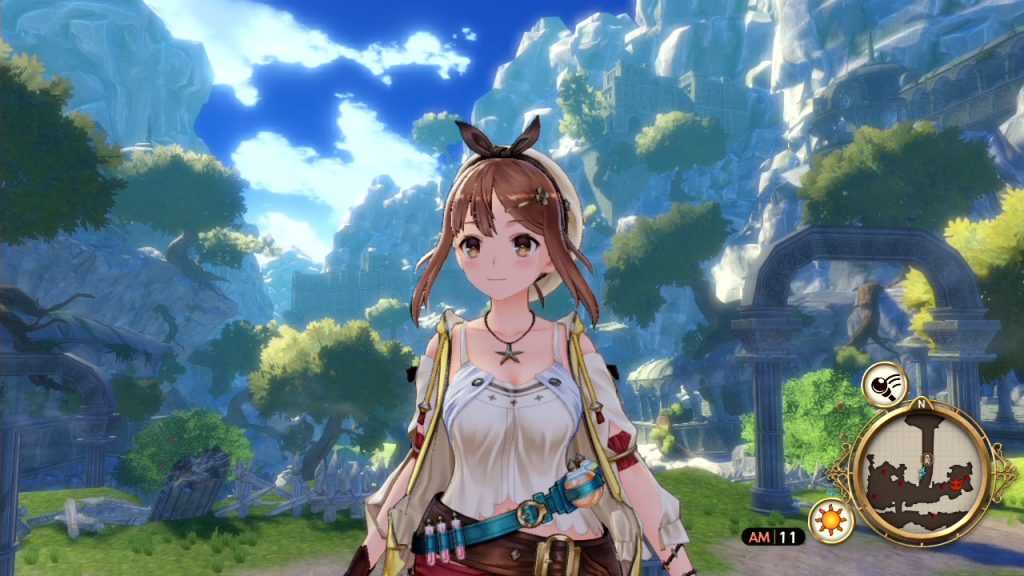 Overall Atelier Ryza: Ever Darkness & the Secret Hideout is the best in a long franchise of games. It has a great story with lovable characters. The latest battle system works like a dream and is fun to play. The new alchemy system put a fresh layer on crafting and modifying. Along with some quality of life additions, especially on the side of alchemy.

I would highly recommend this game if you are a fan of the franchise. If this is your first trip to the Atelier world, wait for a sale as these are not for everyone or get an older title because this would give a good feeling for the game as they follow the same gameplay loop.
This one is a definite buy and a must for Atelier fans.

Check out this review of Super Neptunia RPG, for more JRPG goodness HERE!