Ash of Gods caught my eye from its initial release trailer, with the hand-drawn art style in the same vein as Banner Saga. Now being a bit of an RPG nut, Banner Saga is one of the best on a console, so I was excited. When I got a review copy for this title I was beyond thrilled. Let us see if it was worth the excitement.

The story revolves around three main protagonists, each on their own journey to save the world from the Reapers. Reapers are mystical beings that sign the end times, and where ever they go, they leave behind nothing but death.

The story is expertly written with a non-linear choice-based story line. 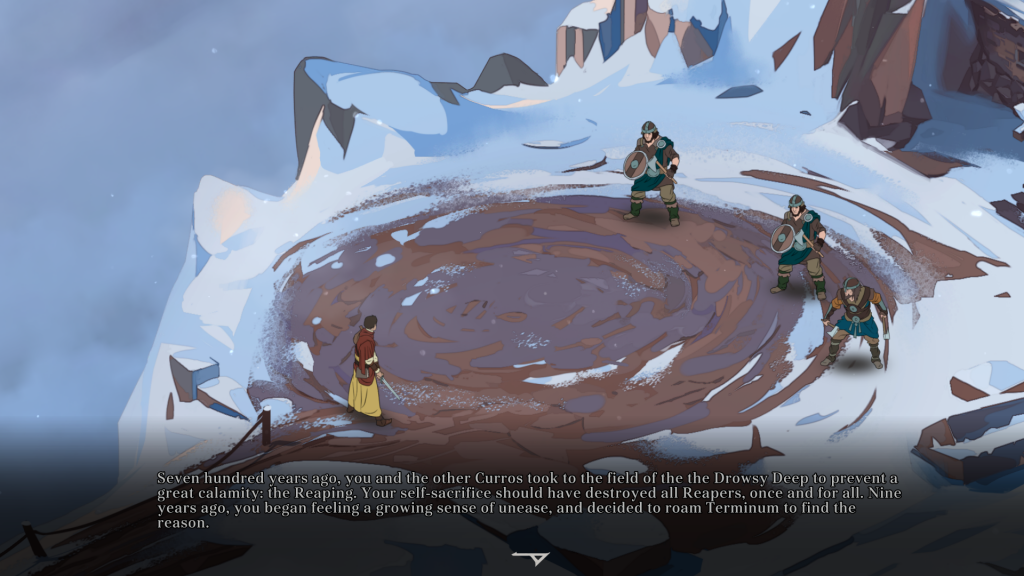 The storytelling, character development and decision making comes in the form of a Visual Novel. This part is straightforward, to explain you read the story. Just like a Visual Novel, there are decisions to make and general questions that open up more dialogue and information. Then there are the decisions that will affect gameplay and story. These consequences are as small as the reaction of a charter to full-blown plot changes.

The story is interwoven and one of the best I have seen in a game in terms of technicality.

The protagonists move along multiple-choice roads to the story destination. Like with everything in Ash of Gods, it is about decision making. I felt the map section has the hardest decisions and made some of the game extremely difficult, this is no overstatement.

Once a destination is decided, your protagonist will move along the route, random events like a battle or a finding treasure and so on may be triggered. On the map screen, there is a resource called Strixes, this is the most important item to manage.

This resource is shared throughout the three protagonists. Strixes count will lower while moving on the map, some decisions made in the Visual Novel sections cause the loss of Strixes. It is possible to recover some Strixes with events findings or decisions. However, it does not help in the long run. Once Strixes run out (they will at some point), there where penalties to pay, these vary and are devastating to the team.

I felt the Strixes loss was way too harsh. I understand the reasoning behind it, makes it seem as the protagonists are just one step away from death. I just feel it should not be as severe as this.

So now we get to the main part of the game’s enjoyment, with a very random option that can be turned on and off. Here we go let’s get this on the road.

Battles have a few elements to them so I will list and explain a little;

Picking the team: as it says you decide who you want in the group, from tanks, mages, archers, fighters, the general classes, with nothing out the ordinary.

Battles in general: As stated before the battle system is a turn-based RPG, with roguelike elements. So each character will take a turn, one at a time, with a movement phase and an attack phase. The character class will alter how many squares they can move and attack.

Roguelike: While in a battle (or decisions) it is possible to get a wound, three wounds and the character will die. Or a character can be killed outright. Once dead they are dead, with a wound stats are lowed. Wounds can be healed via Stixtes.

Cards: Along with attacks and movement there are card attacks, these work sort of like magic, they can only be used once a fight. Once used there is a build-up, these can be from one turn up to four, this is something to remember when using a card. Cards can be obtained throughout the game and selected in the party menu.

These are the main points in battle. I really enjoyed the battle system, there is also an auto-battle option, this is self explanatory but the game plays out battles. I was not too fond of this, of course, this is optional thankfully. Overall the battle system is in-depth and great fun, but  especially unfavorable when Strixes run out. 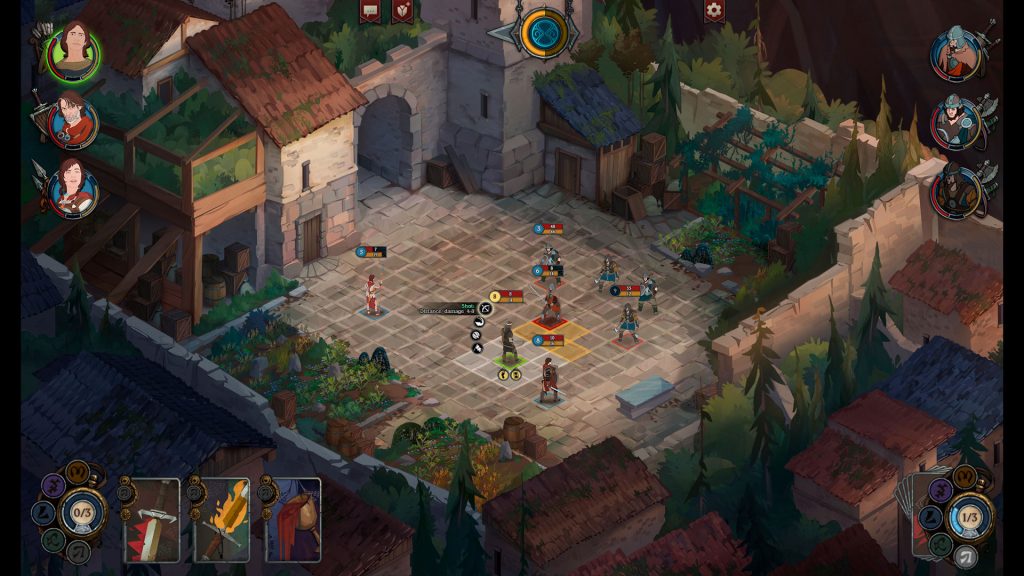 Visually Ash of Gods is beautifully hand-drawn and stunning. With highly contrasting colours and bold shadow work. Old-school Disney cartoons of the 60s as well as the works of the Soviet animation studio Soyuzmultfilm come to mind and not to mention the resemblance to Banner Saga. There is not much else to say, except it is stunning.

There were no bugs I encountered. 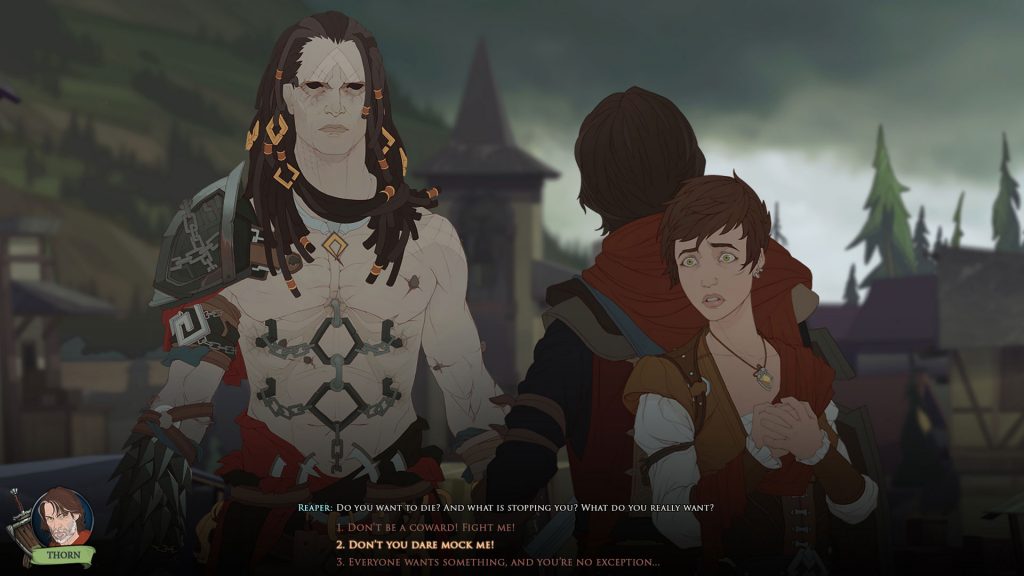 The sound design is excellent, just like the art style, everything seems to be on point. The sounds effects add depth and mood to the game. The voice acting is also great within the game. These all fall short next to the live musical score from the composers of The Witcher. 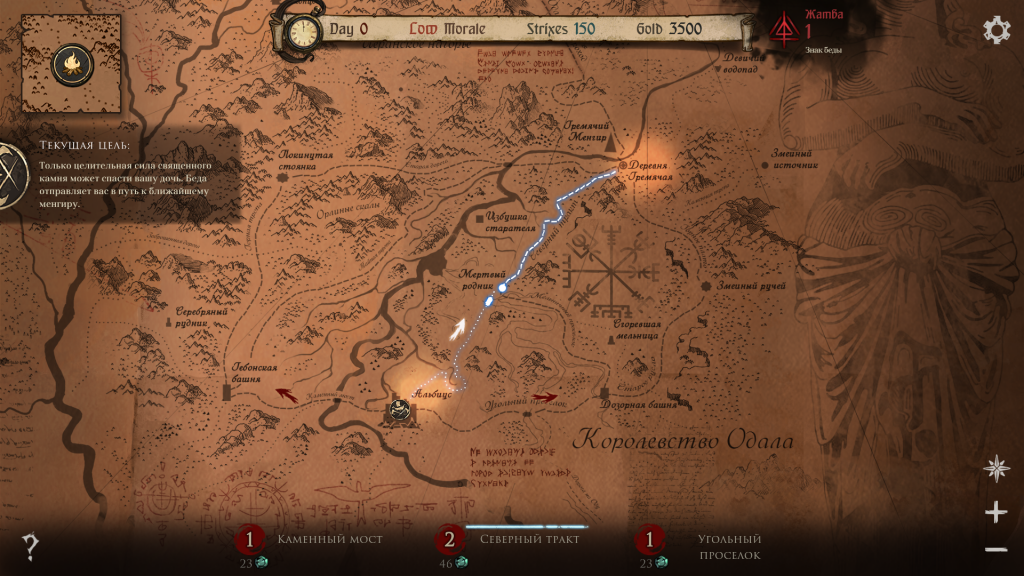 Overall, Ash of Gods is a well-crafted game in all aspects from story, sound and art style. With some incredibly talented writers, composers and artist. These all combine to make something beautiful.

It is, however, unbalanced with the Strixes and how hard the game can get. I would highly recommend this one if you want to play something truly artistically wonderful, then this is for you.

If you enjoyed this, check out our review of Atelier Dusk Trilogy for something different HERE!