I am not going to lie this was a tough one for me to review. I liked the idea but things just didn’t seem right to me.

Arc of Alchemist is set in Earth’s future. Humans have comsumed dwindling resources and destroyed the world with war after war, leaving it a dry and desolate desert. With a few settlements left for the handfuls of remaining humans, a legend has spread of a Great Power that can save humanity.

The last remaining settlements have sent teams to find the Great Power, however, not one team has returned, all wiped out by remnants of the wars. You are one such team and it is up to you to save Earth.

The story is not a bad one, it starts off throwing you in the deep end resulting in a slightly confusing start, but it did get better in time. There is some great and comical writing throughout the game. 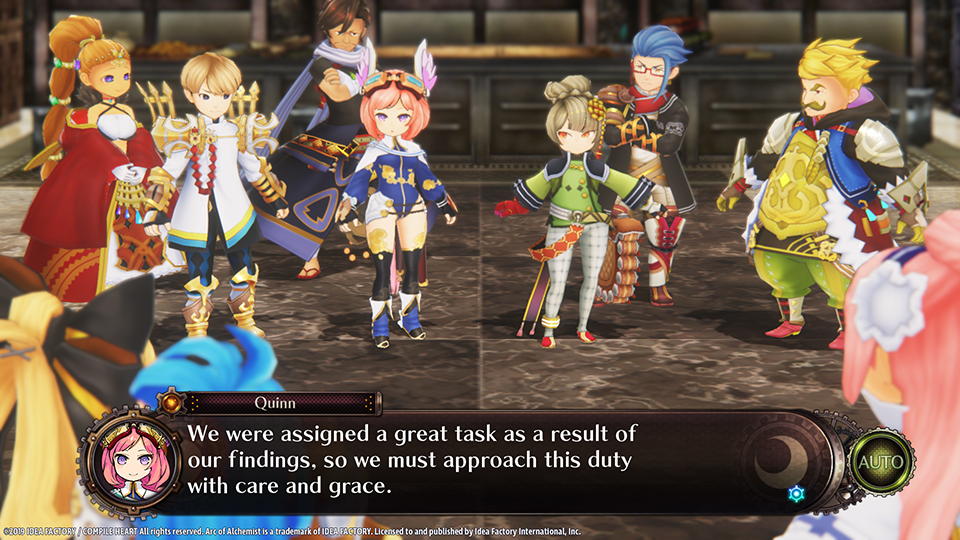 Arc of Alchemist is an anime-style ARPG, that has a few interesting mechanics up its sleeve, but is it enough to be a worthwhile purchase?

At its core Arc of the Alchemist is a good old Hack-and-Slash ARPG, where all battles play out in real-time and you have full control over the main party member with two supporting members that can be vital to survival. The controls work like most ARPGs quick attacks, heavy attacks, special attacks and items. The supporting members of the party will work on their own depending on the orders given, like same target, free for all and so on. It is a simple and effective system used time and time again.

There is one slight difference here though. The player can control when to use party member’s ultimate skill in a battle. It is a simple button press when the special bar is full, but it gives that control rather than in some RPGs specials are used as soon as ready.

From the get-go, there is a full roster of eight characters to choose for the party. I found this fairly confusing as there was too much choice with the party set up and I was spending time picking different party members to be in the team. To make matters worse by the time I found a party that seemed to work there where more characters added to the roster. I do not mind big character rosters but at the start of the game, it was a bit too much.

There is one massive complaint I have regarding the combat and that is with all the stuff going on it is at times hard to see enemy’s attacks. The number of times I died or almost died because of this issue, it got annoying. If a support party member is knocked out, then they come back in around ten minutes. That’s a long time when it is a boss fight.

There is a slight puzzle element in the game and gear to equip that act as a sort of magic. One could be for making a fireball, this is used for lighting up pillars or there is one that makes boxes so you can reach higher platforms.

Let us look at the other mechanics in Arc of Alchemist, your base is vital for the survival of the team. The base can be expanded, buildings crafted and arranged how you feel fit. Depending on how many buildings you have will affect what items the store will sell. While arranging the building can make the base look tidy, it also allows for bonuses if arranged correctly. The bonus counts as an extra building allowing for more gear to be bought.

There is a lot offered in Arc of Alchemist, unfortunately, it feels like a sugar coating for an okay ARPG. 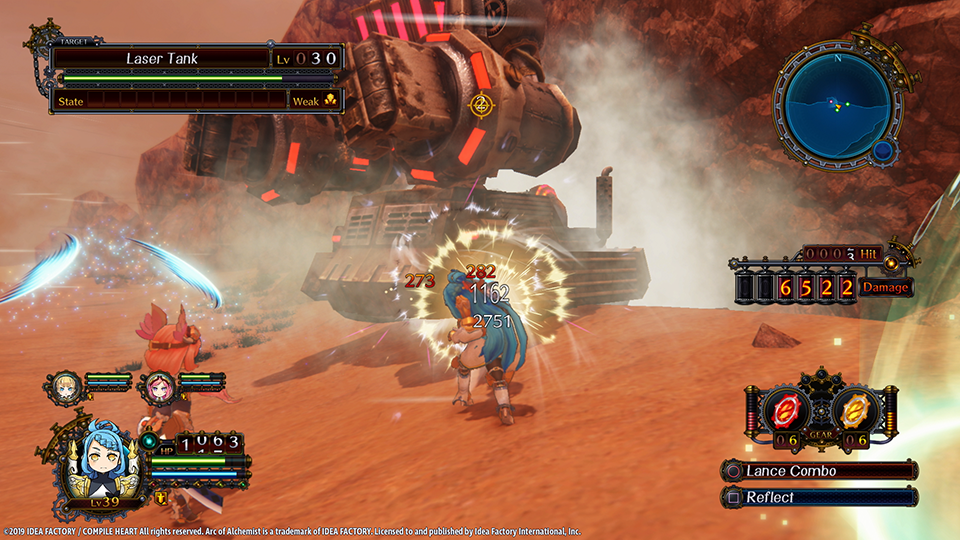 Visually, Arc of Alchemist goes for a sort of anime style for the character model. It does, however, have a charm that pulls you in. This is where the charm ends. I liked the character models, but the enemy models and the world was a little bit less than to be desired. There is plenty of desert wandering. ‘it was so lifeless even with enemies popping up on the screen. Too many reused assets, and enemy models with slight pallet swaps, it felt lazy.

There were no bugs I ran into while playing. 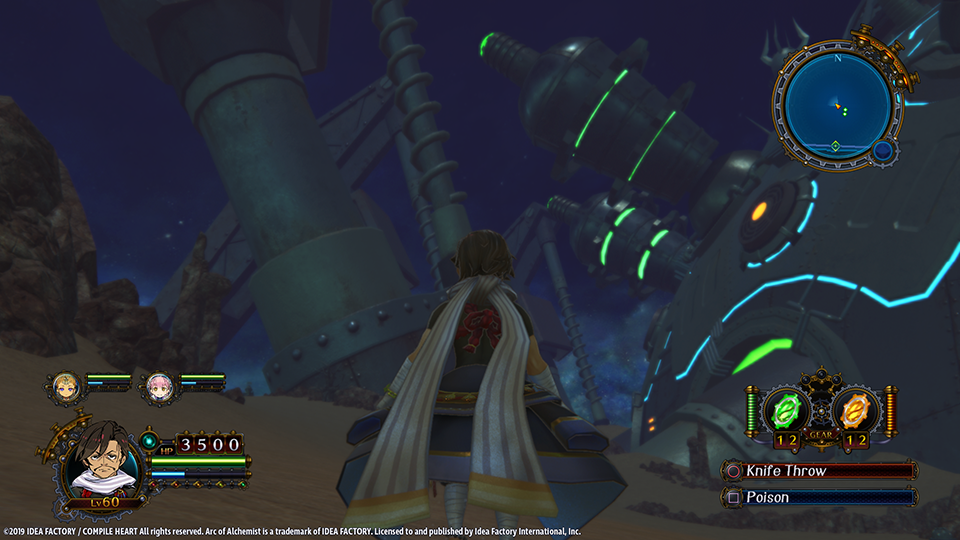 Sound design was not too bad. The music was that of a grand adventure and typical stuff we have come to expect from If Idea Factory games. Sound effects where decent enough to get by.

The voice acting was great! The V.A. seemed to capture each character perfectly and infuse life into them, along with some good writing, this was by far the best part. 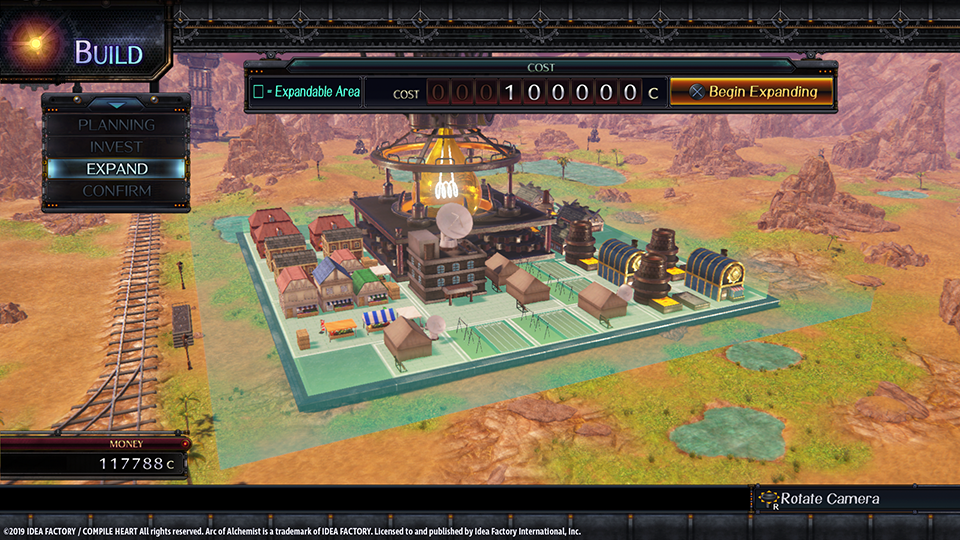 Overall, Arc of Alchemist is a fair bog-standard ARPG, with a few extras thrown in. The mechanic’s alone sound great but here did not overly gel with the fighting and really suffered more than anything.

If you are an ARPG fan, then I would wait for a sale to get this one. It is worth playing just not great for the asking price.

If you enjoyed this review check out our review of Heroland HERE!